Non League side Sheriff YC shocked First Divison side UCD to progress to the third round of the Irish Daily Mail FAI Cup.

The AUL (Athletic Union League) side eased past the Students 3-1 at the UCD Bowl on Sunday evening with Kevin Lynch opening the scoring for the north Dublin side after 37 minutes to give Sheriff a 1-0 lead at the break.

Sean Murphy doubled the lead for the visitors five minutes after the restart with a well-taken lobbed effort, before Mark Higgins sealed the win in the 77th minute.

Chris Mulhall grabbed a late consolation at the windswept Belfield venue but it was too little too late for College who can resume their battle for promotion to the Premier Division as Sheriff go into the hat for the third round draw.

Derry City made it through to the third round with a 3-0 win over Edenderry Town in Offaly.

Orrin Farrell had a goal disallowed for Edenderry when the score was 1-0 but apart from that they rarely threatened and City missed a penalty prior to opening the scoring.

Sligo Rovers were also comfortable winners against Crumlin United at The Showgrounds.

Dinny Corcoran and David Cawley scored in the first half to give Owen Heary's men a 2-0 success.

Elsewhere, Cobh Wanderers came from 3-1 down to force a Wednesday replay with Avondale United.

Donegal outfit Cockhill Celtic secured their passage to the next round with a 3-0 victory over 10-man St Mochta's. 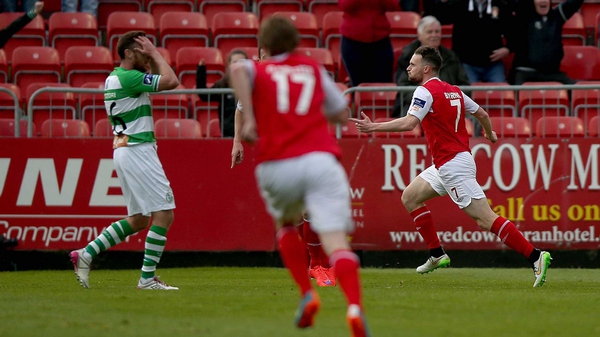