The battle for the FIFA presidency will be a two-horse race after Luis Figo joined Michael van Praag in withdrawing his candidacy on Thursday.

Dutch Football Association president Van Praag earlier pulled out of the race and gave his backing to Prince Ali bin Al Hussein, who will now go head to head with Sepp Blatter for the top job in world football.

Former Portugal international Figo then issued a lengthy and scathing statement on his Facebook page, in which he said: "My decision is made, I will not stand in what is being called an election for the FIFA presidency."

Figo said he had “witnessed consecutive incidents, all over the world, that should shame anyone who desires soccer to be free, clean and democratic.

“I have seen with my own eyes federation presidents who, after one day comparing FIFA leaders to the devil, then go on stage and compare those same people with Jesus Christ. Nobody told me about this. I saw it with my own eyes.

“The candidates were prevented from addressing federations at congresses while one of the candidates always gave speeches on his own from the rostrum. There has not been a single public debate about each candidate's proposals.

“Does anyone think it's normal that an election for one of the most relevant organizations on the planet can go ahead without a public debate?

"Does anyone think it's normal that one of the candidates doesn't even bother to present an election manifesto that can be voted on 29 May? Shouldn't it be mandatory to present such a manifesto so that federation presidents know what they're voting for?

“That would be normal, but this electoral process is anything but an election.

“This (election) process is a plebiscite for the delivery of absolute power to one man - something I refuse to go along with.”

Figo continued: "For my part, I will abide by the ideas I leave written and have circulated, I am firm in my desire to take an active part in the regeneration of FIFA and I will be available for it whenever it is proven to me that we are not living under a dictatorship."

A statement from Van Praag's office said: "After thorough deliberation and reflection with different involved parties and stakeholders, Michael van Praag decided to withdraw his candidacy to become the next FIFA president and to join forces with presidential candidate Prince Ali Al Hussein."

Last week the Dutch FA president was insistent he would stay in the contest to the end despite feelings at UEFA that the biggest challenge to Blatter would come from a single candidate.

Prince Ali, Van Praag and Figo had all been campaigning on a reformist platform. Earlier this month Prince Ali said he would not pull out of the election.

"I will continue the race until the end," Prince Ali said then, adding he had received "supportive and positive responses" from the football federations he had visited and "the warm welcome" his manifesto had received. 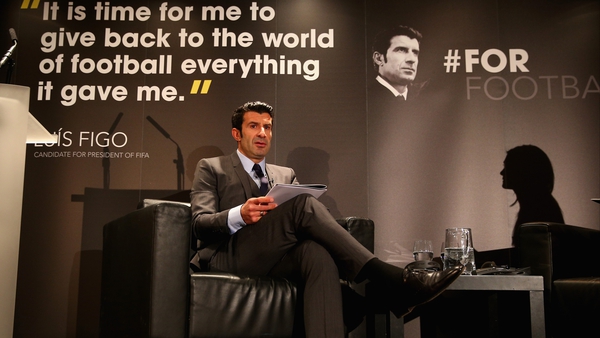