Sunderland battled to a scoreless draw at Arsenal, which was enough to keep them in the Barclays Premier League.

The Black Cats needed a point to avoid a nervous final day of the season at champions Chelsea on Sunday.

Despite Arsenal having plenty of chances to put the match beyond Dick Advocaat's side and so secure third place, the hosts were left frustrated following a resolute display by Sunderland, which leaves Newcastle and Hull now alone in facing the scrap for survival.

Hull are at home to Manchester United while Newcastle host West Ham.

Arsenal, who started the day two points ahead of Manchester United in their quest to secure automatic Champions League qualification, had opened brightly.

On 14 minutes, midfielder Jack Wilshere, making a first start since November, was played into the right side of the Sunderland penalty area by Alexis Sanchez, but goalkeeper Costel Pantilimon was out quickly to block, taking a blow to his knee in the process.

Wilshere, now back to full fitness following another injury-hit campaign and expected to be involved again with England in Thursday's squad announcement, volleyed high into the Clock End after being set up by Aaron Ramsey following another quick Arsenal counter-attack.

On 30 minutes, Mesut Ozil was picked out by a perfectly weighted chip from Wilshere, but the German crashed his half-volley over.

Arsenal continued to probe, with Wilshere again the provider as his dinked pass into the left side of the penalty area was pulled back across goal and just wide of the far post by Olivier Giroud.

When Sunderland did make a rare break, midfielder Adam Johnson drilled his 20-yard rising effort over.

Despite all of Arsenal's possession, Pantilimon was not really tested as the first half faded out.

Sunderland manager Advocaat, who has never been relegated, looked to freshen things up for the second half as Jack Rodwell and Steven Fletcher replaced Connor Wickham and Danny Graham.

The Gunners were defeated 1-0 in a smash-and-grab raid by Swansea on the Emirates Stadium last Monday night, and were almost caught out again following the restart.

Arsenal goalkleeper David Ospina had to be alert to come out and block an angled shot from Graham and then stood up at the other post to deny left-back Patrick van Aanholt, who had surged forwards on the overlap.

That scare sparked Arsenal into life, with Giroud getting on the end of a whipped ball in from the right by Hector Bellerin, which Pantilimon turned away at point-blank range before the Sunderland goalkeeper plucked a goal-bound header from Kieran Gibbs out of the air at the far post.

Arsenal opened Sunderland up again as Ozil picked out Sanchez in a crowded box, but his shot was blocked.

Sunderland broke suddenly as Fletcher latched onto a long ball down the left, and sprinted into the Arsenal penalty area. His attempted chip, though, was palmed behind by Ospina.

Sunderland should have taken the lead moments later when Van Aanholt played the ball across the Arsenal penalty area from the left, and Fletcher got ahead of Laurent Koscielny but could only stab the ball over the crossbar from six yards.

Walcott was played into the right side of the Sunderland penalty area between the defenders but, although he tapped the ball past the keeper, Sebastian Coates came across to hack it off the line.

Sunderland then enjoyed a huge slice of fortune as a cross in from the right was sliced by Coates onto Billy Jones, and the ball cannoned back up onto the crossbar before bouncing clear.

Arsenal continued to press Sunderland back, with substitute Tomas Rosicky, Giroud and Walcott all going close, but the visitors held on, sparking wild celebrations among the travelling support at the full-time whistle. 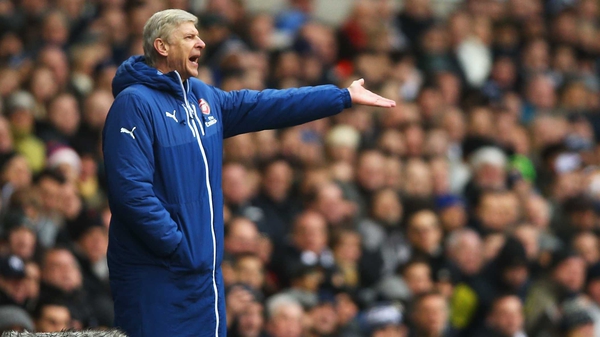