Manchester United boss Louis van Gaal has dropped a hint that goalkeeper David de Gea may have played his last game for the club.

De Gea, who has been heavily linked with Real Madrid, was forced off injured after 74 minutes of United's 1-1 draw with Arsenal in the Premier League.

That means he is now doubtful for the final game of the season at Hull and, beyond that, Van Gaal has indicated he expects La Liga giants Real to make a move.

Van Gaal was asked repeatedly about De Gea's future after the game at Old Trafford and, although he said the 24-year-old Spaniard would "not leave us so easily" he appeared braced for such an outcome.

Van Gaal said: "You are asking things I cannot answer because I don't know.

"I have also said a transfer is an individual thing. It is a process. He has to decide because we have given (him) a fantastic contract because we want him to stay - fantastic season, I think.

"But I analyse his position and then I say he is Spanish, he is a Spanish international and now a Spanish club is coming. His girlfriend is Spanish."

De Gea, signed from £18.9million from Atletico Madrid four years ago, has developed into one of the world's best keepers at Old Trafford and enjoyed an outstanding campaign.

Asked if Real had already made an approach Van Gaal said, "I don't know" but he did not deny the Bernabeu was a likely destination, even if he did not refer to the club by name.

Whatever the outcome of the speculation, or possible future offer from Real, Van Gaal feels United and their fans - who chanted the player's name regularly - have done all they can to keep him.

He said: "I don't think I can persuade him because he knows everything what he has at Manchester United. I don't have to say something because he can feel it every day. You have seen the fans, unbelievable.

"When he goes he is losing that. Here he has a lot of credits. He has to decide."

Another player who could be leaving United at the end of the season is striker Radamel Falcao, whose season-long loan from Monaco is coming to an end.

United have an option to buy but the Colombian has failed to impress and he was substituted on 61 minutes after another fruitless performance.

Van Gaal insisted no decisions had been made about the 29-year-old.

He said: "You know how the situation is of Falcao. At the end of the season we will decide."

"I think the difference between Chelsea and Manchester United at this moment is that they can finish a game, they can kill the game" - Louis van Gaal

In terms of the action, United missed the chance to climb above Arsenal into third in the table.

Ander Herrera put the hosts ahead with a fine volley as United dominated the first half but the Gunners finished strongly and claimed a point as a Theo Walcott shot was deflected in by Tyler Blackett in the 82nd minute.

Van Gaal said: "I think the difference between Chelsea and Manchester United at this moment is that they can finish a game, they can kill the game.

"When you are 1-0 ahead with fantastic football and they don't cross the (halfway) line in the first half, you create a lot of chances, then you have to finish the game.

"That is the mentality we have to improve."

United seem likely to finish in fourth. Van Gaal has said that a club of United's stature need to be aiming higher but, after last year's seventh, it is satisfactory for now.

He said: "We have set our goal. My board is satisfied, the fans are satisfied. It is amazing when you are fourth and the fans are clapping for so long. I had never that experience at my other clubs."

Gunners boss Arsene Wenger, whose side can secure a final position of at least third in midweek, felt the visitors deserved more for their strong finish.

He said: "I am pleased with the performance and the only regret I have is we didn't take the three points.

"We were a bit slow to start, Man United were sharper at the beginning and we were a bit stretched as well. In the second half we were more compact and took over and showed a great response. We got a deserved point. We won more duels and had enough chances to win the game in the end."

Third place would bring the advantage of going straight into the Champions League group stages next season, avoiding the play-off round.

Wenger said of third: "It takes the pressure off during the holidays and in the preparation period. It would be great to do it, but it is still to do."

Asked if he should be satisfied with third, Wenger said: "If you had asked me in October, I would have said yes. Overall, of course you want to be first, but 17 teams would exchange a position with you." 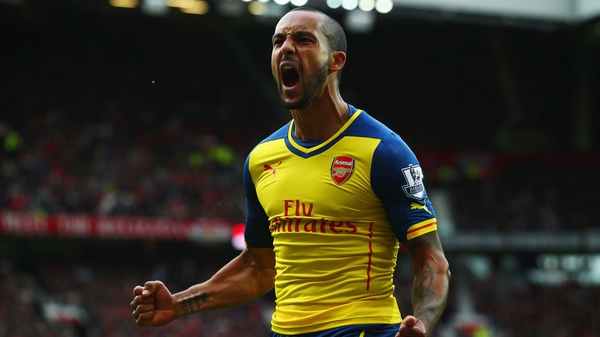 Man U and Arsenal share points at Old Trafford