Dnipro Dnipropetrovsk reached their first European final when Yevhen Seleznyov's header gave them a 1-0 win over Napoli in the second leg of their Europa League semi-final.

The Ukrainians, backed by a fervent sell-out crowd at Kiev's Olympic stadium, completed a 2-1 aggregate win after drawing 1-1 in last week's first leg when Seleznyov was also on target.

They will face holders Sevilla in the May 27 final in Warsaw after the Spaniards beat Fiorentina 2-0 away to wrap up a 5-0 aggregate triumph on a bad night for the Italians.

Dnipro goalkeeper Denys Boyko, who denied Napoli forward Gonzalo Higuain four times in Italy, foiled the Argentine twice in the first half to keep the sides level at halftime.

Seleznyov struck just before the hour and the hosts, unable to play in their home stadium because of Dnipropetrovsk's proximity to the conflict in eastern Ukraine, defended with their customary tenacity to see out the game.

Boyko has been a key figure throughout Dnipro's campaign, which began in the Champions League third qualifying round on July 30, and the stopper was again fundamental to their performance on a pitch made treacherous by driving ran.

Napoli began well and Gokhan Inler sent Higuain clear but the forward's shot was too near Boyko, who made a one-handed save to deny the visitors an early goal.

Higuain's frustration continued when he met Faouzi Ghoulam's pinpoint cross with a glancing header which was heading for the far corner until Boyko tipped the ball away.

At the other end, Napoli's David Lopez lost possession and their keeper Mariano Andujar had to push Seleznyov's long-range shot round the far post in Dnipro's only first half chance.

Dnipro, playing their 18th European match of the season, broke through in the 58th minute when Yevhen Konoplyanka floated over a cross from the left and Seleznyov, despite grappling with Miguel Britos, managed to head the ball into the net.

The hosts had a let off when a looping Higuain effort was cleared off the line and Boyko stopped a Christian Maggio effort at the near post but they held on for a famous win. 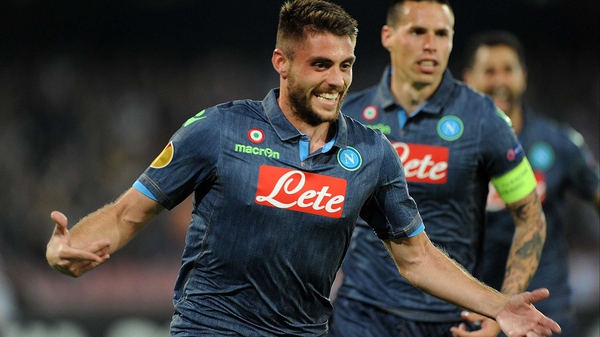