Arjen Robben has been ruled out for the rest of the season with a torn calf muscle, Bayern Munich have confirmed.

The forward, who suffered the injury in Bayern's DFB-Pokal semi-final penalty-shootout defeat to Borussia Dortmund on Tuesday night, will miss the Champions League semi-final against Barcelona and a possible final appearance.

The Netherlands international was only making his comeback against Dortmund from a stomach muscle injury.

And there was worse news for the Bundesliga champions, with Robert Lewandowski suffering a fracture to his nose and upper jaw in a clash with Dortmund goalkeeper Mitchell Langerak.

The club described the Poland striker's injury as "serious", but said further tests were needed to determine how long he would be out for.

The news is a blow for the Bundesliga champions ahead of their two-legged clash with the Catalans, which will see boss Pep Guardiola take on his former club for the first time.

The absence of Robben and possibly Lewandowski would deprive Bayern of two of their most important attacking threats.

There was at least better news regarding Thiago Alcantara, who also picked up a knock in the match. He has suffered only "slight bruising".

Bayern lost to Dortmund on penalties, missing all four of their spot-kicks following a 1-1 draw.

Philipp Lahm and Xabi Alonso both slipped and Mario Gotze's penalty was saved before Manuel Neuer sent his spot-kick against the crossbar.

Pep Guardiola was full of praise for his side's performance, though.

He said on the club website: "I'm proud of my team as never before. You can't criticise your team when they've played so well. I'm very proud of my players. We did everything we could and I'm happy with that.

Dortmund boss Jurgen Klopp added: "That was the game from hell. We were lucky, no question about it."

Lewandowski said he hoped he would be fit for the away clash with Barca in a week's time.

"Its a few more days till the match at Camp Nou, i really hope i will be able to play!" he said on Twitter. 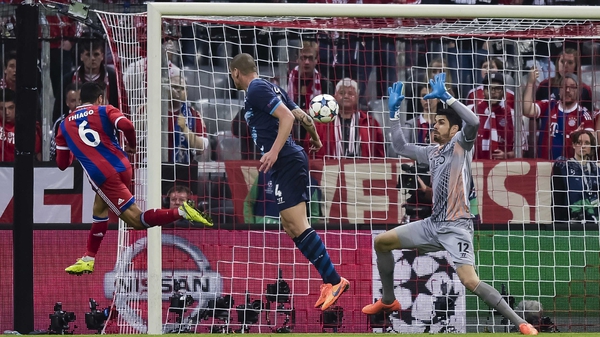