City maintained their pursuit of the leaders, and also their 100% home record, with a 2-0 win over Longford Town on Monday night, which leaves the Rebels two points behind the reigning champions.

This will be the first meeting between the two sides since the final day of last season, when goals from Stephen O’Donnell and Brian Gartland gave Dundalk a 2-0 win and the league title.

Alan Bennett is fit to start after recovering from a hamstring injury, however, manager John Caulfield has concerns over the availability of Karl Sheppard, John O’Flynn and John Dunleavy. All three are likely to undergo late fitness tests.

Speaking ahead of the game, Caulfield said: “Most people think Dundalk will win the league this year, but it is up to us to see where we are at. I think we are better than we were last year and we have started the season well, so we are all looking forward to it.

"We know it is going to be very tough, but we have new targets this year and we believe that we can stay right up there until the end.”

Champions Dundalk maintained their unbeaten record in the league on Monday when they beat Galway  3-0 at Oriel Park. Richie Towell was once again the hero as he struck a superb hat-trick in the first 15 minutes of the second half.

Gary Rogers returns to the squad after missing out on Monday due to the suspension incurred for his red card last week against Shamrock Rovers.

Brian Gartland is recovering from a hamstring strain but should be fit to play, while Stephen O’Donnell is pushing for a start, having come through the past month unscathed in his return from knee surgery.

Speaking ahead of the game, midfielder Richie Towell said: “Cork City is a massive game. With it being on television, it’s going to be a great occasion.

“It’s going to be a really difficult game. We know how good they are but we are focusing on ourselves. These are the games you want to play in and we’ll go there in a positive manner and hopefully win the game.”

Watch Cork City take on Dundalk live on RTE2 and worldwide on RTE.ie and the RTE Player. 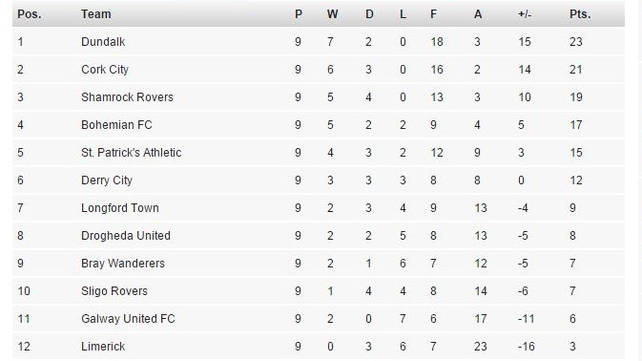 Derry City will look to continue their unbeaten run as they take on Bohemians in tonight’s SSE Airtricity League Premier Division clash at the Brandywell.

The Candystripes are unbeaten in their last three league games and will be looking to get back in touch at the top of the table as they welcome high-flying Bohemians.

Derry are struggling with a lengthy injury list as Shaun Kelly and Sean Patton  are ruled out with knee injuries, while Aaron Barry is also ruled out as he is nursing a calf injury.

Stephen Dooley is also set to miss out due to back trouble, Seamus Sharkey will sit the game out as he recovers from concussion, while Shane McEleney is missing with a hamstring strain.

Dean Jarvis is ruled out with a hip injury, and Phillip Lowry is nursing a groin strain so will not feature.

Ryan McBride, however, will return to the side after serving a suspension.

City manager Peter Hutton said: “This game will really be a big test for us. Bohemians will arrive here in good form and feeling  very positive.

“They have been playing very well so far under the guidance of Keith Long and it shows with the scalps they have already taken and the fact they have yet to concede on the road.

“From our own point of view, we have been excellent in training all week and we know that we are hard to break down and score against, while at the same time, we have a lot of attacking options that can cause any team problems.”

Bohemians travel to the north-west for the second time this week aiming to preserve their unbeaten away record this season.

Robbie Creevy remains a doubt as he recovers fom an ankle injury that ruled him out of the midweek game with Sligo and the midfielder will face a late fitness test.

After a long lay-off with a cruciate injury, Dan Byrne returned to full training this week, which is “a great positive for the club”, according to manager Keith Long.

Long added: “Derry is a tough place to go and a tough place to get anything from. But I, along with the backroom team and the players, believe we can go there and put in a good performance, which we hope will lead to a positive result.

“The results we have had on the road so far give us confidence and we’ll go there in good spirit.”

Drogheda United will look to get back to winning ways as they take on Longford Town in tonight’s SSE Airtricity League clash at United Park.

Johnny McDonnell’s side opened their campaign with two straight victories but have failed to take maximum points in any subsequent games.

United ended their losing streak at Richmond Park on Monday night as they drew 2-2 with St Pat’s and McDonnell’s side will be looking to go one better as they take on newly promoted Longford.

Neil Yadolahi remains out injured as he continues to recover from a thigh injury, while Dylan Connolly has resumed training following a shoulder injury and will be available for selection.

“The upcoming run of games is where we will be expected to pick up the majority of our points but things don’t always work out like that,” said McDonnell. “It’s great to be impressive and motivated against the big sides but we must bring that into the other games this season.

“Longford will be a difficult game as they are a well-organised side that like to play with a direct style which works for them as they have two goalscorers up front in Gary Shaw and David O’Sullivan. It’s going to be a scrappy game and we must match their work rate if we are to get the victory that we want.”

Longford Town manager Tony Cousins has no injury concerns ahead of the visit to United Park as seventh placed Town hope to pick up points on the road following Monday's 2-0 defeat at Cork City.

St Patrick's Athletic will be looking to stay in touch at the top of the table as they take on struggling Sligo Rovers in tonight’s SSE Airtricity League clash at Richmond Park.

Saints will give a late fitness test to Christy Fagan as he recovers from a knee injury.  Cyril Guedje has returned to full training from a hamstring injury and is back in contention to feature.

“Games between ourselves and Sligo have been really entertaining affairs in the past few years,” said St Pat’s manager Liam Buckley.

“We’ve had some top of the table clashes, games of really open football and the standard has always been top quality.  I’d expect nothing different on Friday and the players know what to expect on the night. We’ll be looking to improve on a few things and hopefully get three points on the night.”

Sligo must plan without centre-backs Gavin Peers and Jeff Henderson as the defensive duo are struggling with groin and foot injuries respectively.

Danny Ledwith returns to the squad after serving his suspension, while Kevin Devaney looks set to be fit after missing the Bohemians clash with a virus. Steven Beattie has recovered from a hamstring problem and should be named in the matchday squad.

Looking ahead to the trip to his native Dublin, Sligo boss Owen Heary said: “I think it’s clear to see the progress that has been made in the weeks since Liam O’Brien and Joseph Ndo have come in.

“I don’t think the problem is confidence, I do believe that we will get goals. As long as we are defending well I think there is goals in us to win games.

“I still think Pat’s are a very good team. They still have a lot of players there from the team that won the league two years ago and they won the cup last year as well. So they have had a lot of success together. But we will go there with the same frame of mind we have taken into all our games and will be going to get the win.”