Barcelona reached the Champions League semi-finals for the seventh time in eight years after comfortably brushing aside the challenge of Paris St Germain.

Barca did most of the damage in the first leg with a 3-1 win in Paris and they finished the job off with relative ease at the Nou Camp, with two first-half Neymar goals earning a 2-0 win.

Luis Enrique's in-form side will now go into Friday's mouthwatering draw for the last four along with Bayern Munich, with one of last season's two finalists - Atletico and Real Madrid - joining them, as well as either Juventus or Monaco.

The 5-1 aggregate victory also keeps Barca firmly on course for the treble, having already reached the final of the Copa del Rey and boasting a two-point lead in La Liga with six games to go.

Neymar broke the deadlock in the first leg and it was him who got things up and running on Tuesday as well, although it was some Andres Iniesta magic that made it happen.

Iniesta, wearing the captain's armband, missed the weekend win over Valencia through injury, but showed no sign of any ill-effects as he brilliantly beat three players as he charged through the PSG midfield before threading a perfect pass into Neymar's path.

The Brazilian did the rest, rounding Salvatore Sirigu and slotting into an empty net.

Dani Alves tested Sirigu with a long-range piledriver that the PSG keeper did well to parry, but he was beaten for a second time in the 33rd minute as Barca further strengthened their grip on proceedings.

Alves teased former Barca team-mate Maxwell on the right before floating in a left-footed cross which Neymar, having ghosted in behind David Luiz, easily headed past Sirigu.

The tie was as good as over, although PSG continued to battle and another of their ex-Barca contingent Zlatan Ibrahimovic - who had an effort correctly ruled out for offside in between Neymar's strikes - almost brought them a goal midway through the second half.

The Sweden international, who missed the first leg due to suspension, ignored the run of an unmarked team-mate to try his luck from 25 yards out and his well-struck effort drew an awkward save out of Marc-Andre ter Stegen.

Edinson Cavani and Blaise Matuidi then tried to scramble the ball home with 10 minutes left as the French champions continued to probe, albeit against a Barca side that already knew the job was done.

Substitutes Lucas Moura and Ezequiel Lavezzi both also spurned openings to get on the scoresheet for Laurent Blanc's men before Lionel Messi fired a shot just wide at the death for Barca, who have now won 23 of their 26 competitive games in 2015. 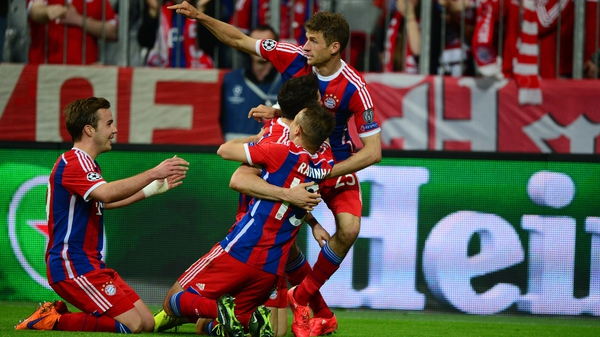 As it Happened: Barca & Bayern advance to semis