Keeper Jan Oblak was Atletico's hero in the first leg as he denied Real a priceless away goal as the clash at Vicente Calderon ended 0-0.

The 22-year-old Slovenian pulled off two vital first-half saves, the first of them at point-blank range, to deny Gareth Bale and enable Atletico to extend their unbeaten record against Carlo Ancelotti's men this season to seven games.

Atletico have beaten their neighbours four times and drawn against them three times in their bid for revenge for last season's Champions League final, which Real won 4-1 after extra time.

"We have to show intensity, be completely focused, play well, [we must] all stick together. I think that if we do that we'll come away with an excellent result," Rodriguez told the club's official website.

"We're all dreaming of getting through this round, and if I can score too that'd be great. What's important is winning and getting through this tough match, which is going to be difficult, but we're here at our home stadium and in front of our fans. I think it could be a great match."

Rodriguez added: "Atletico are an intense team who are good at the back and are a unit. There's always pressure here. You have to know how to handle it. We're going to give everything to be able to win La Undecima."

Real were dealt a blow ahead of the match with news that Bale has a calf injury and is likely to miss the clash, while Luka Modric will not play because of a knee injury.

The Welsh forward lasted just a few minutes before limping off during Real's 3-1 home victory over Malaga on Saturday.

Real said in a statement on Monday: "The tests done on Gareth Bale by Real Madrid's medical staff have revealed a muscular lesion in his soleus muscle in his left leg. His condition will be evaluated."

It was also announced that striker Karim Benzema is to miss the game. "He had a swollen knee and he hasn't been able to recover," Ancelotti said.

Atletico striker Antoine Griezmann, meanwhile, thinks his side will follow up their strong performances against Real with a victory on rival turf with the semi-finals at stake.

"We are pleased with our performances this season against Real, but we know that we are going to suffer a lot on Wednesday," the France international said.

"With every game I play here I am more settled and confident. I hope I can help the team to prevail Wednesday." 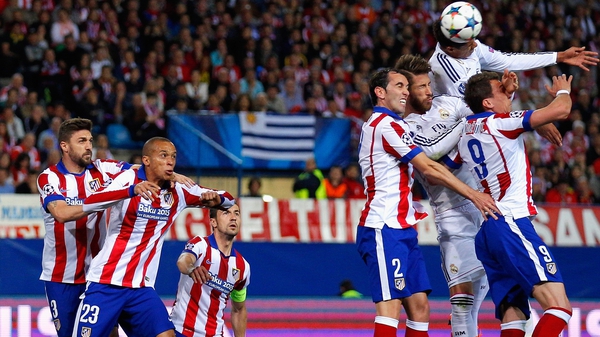