Paris St Germain midfielder Blaise Matuidi is urging his team mates to show heart when trying to overturn a 3-1 deficit to Barcelona at the Nou Camp tonight (7.45pm).

PSG lost the Champions League quarter-final first leg last week in France but will be bolstered by the return of midfielder Marco Verratti and former Barca striker Zlatan Ibrahimovic from suspension.

"We have to go to the Camp Nou without a complex and try everything to achieve the feat," Matuidi told L'Equipe.

"We will have to show a lot of heart and we will also have to defend very well, something that we failed to do in the first leg."

Laurent Blanc's men are without captain Thiago Silva, who failed a late fitness test and has remained in Paris, as well as the injured Thiago Motta and suspended Serge Aurier.

The Brazilian defender missed Saturday's 3-1 triumph at Nice, which kept PSG second in the Ligue 1 standings, and has not recovered from a thigh injury he picked up against Barca in the first meeting.

Barca coach Luis Enrique, whose side is in last eight of the competition for a record eighth consecutive season, says his team's passage to the semi-finals is not guaranteed.

"We need another big game in order to qualify," he said. "We have an advantage but nothing is decided.

"The biggest challenge for us is that we face a strong rival whose only option is to win."

Enrique will be hoping to celebrate his 50th match in charge of Barca by clinching a 42nd win.

The former Spain international is the only Barcelona coach to have claimed that many victories in his first 50 games.

"We approach this game with the same mentality as the first leg," Luis Enrique said. "We want to win.

"Ibrahimovic is one of the best centre-forwards in the world and it will be an extra motivation for us to stop him."

Lionel Messi, who scored his 400th goal for Barca in Saturday's 2-0 triumph over Valencia to keep his team two points clear of Real Madrid at the top of the Primera Division, will play alongside Luis Suarez and Neymar in attack.

"Leo is in great form," Luis Enrique said. "To have reached 400 goals is unique, unrepeatable."

Suarez struck twice against PSG to increase his Champions League tally to six goals and scored his team's opener against Valencia.

"I feel I am helping the team with goals and assists," the Uruguay forward said.

PSG have already beaten Barca this season, a 3-2 win in Paris in the group stages back in September.

"Our biggest challenge is complacency," Suarez said. "PSG have top players capable of turning around the tie." 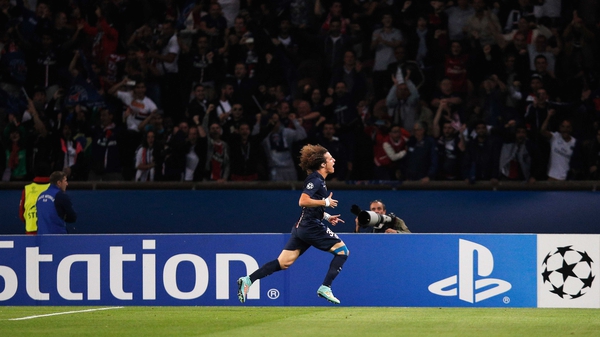