Cork City survived a spirited late comeback from Drogheda to maintain their early title challenge with a hard-fought 2-1 victory in this SSE Airtricity League clash at Hunky Dorys Park.

Two goals in a two-minute spell put the Leesiders firmly in the driving seat as Billy Dennehy headed home a Ross Gaynor cross on 17 minutes, before supplying a corner from which Kieran Djilali scrambled the ball past Drogs keeper Micheal Schlingermann.

Cork netminder Mark McNulty wasn’t tested until first-half stoppage time when he pushed away a fierce Stephen Maher drive, but Drogheda improved in the second half and set up an exciting finish when 18-year-old Lloyd Buckley headed home his first senior goal with 12 minutes left.

Cork virtually owned possession in the opening quarter as they moved the ball around with purpose, but it was from his own team-mate that Drogheda keeper Schlingermann was first tested as he was forced to head clear an over-hit Michael Daly back-pass.

Schlingermann then clawed away a fine John Kavanagh effort, before the home side were stunned as Cork struck twice in the space of two minutes.

They didn’t have to work too hard for either goal, particularly the first in the 17th minute as Dennehy got away from his marker to plant a simple header beyond Schlingermann from Gaynor’s cross.

Poor defending from a Dennehy corner resulted in Cork doubling their lead as Daly’s attempted header clear dropped towards Djilali, who stabbed the ball over the line from two yards.

Somehow, Drogheda picked themselves up and gained a foothold in the game, with Sean Thornton earning a free in a dangerous position, only to fire the resulting kick into the heart of the Cork defensive wall.

The hosts' best opportunity of the first half presented itself in the 41st minute when Thornton sent the ball wide to Joe Gorman who steered a cross to the feet of Stephen Maher and the midfielder looked to the heavens after firing wide from 10 yards.

And it was Maher who forced Mark McNulty into his first save of the match on the stroke of half-time, with the Cork keeper forced to dive to his right to keep out the Drogheda man’s firmly struck 20-yard shot.

The visitors’ goal had a lucky escape immediately after the restart when Sean Brennan hooked in a dangerous cross and Carl Walshe nipped in between two defenders to head the ball narrowly wide.

Cork looked happy to play a containing game and the Boynesiders threatened again on 57 minutes when Maher played the ball into the path of Walshe, whose mishit shot took a deflection and McNulty had to dive smartly to his right to keep it out.

The Leesiders should have put the result beyond doubt on 61 minutes when John Kavanagh’s superb corner kick was almost turned into the net at full stretch by Dennehy.

However, a similar set piece at the other end from Brennan was nearly bundled in at the near post by Daly and Drogheda set up a grandstand finish when 18-year-old centre-half Buckley powered a Brennan corner past McNulty on 78 minutes, however Cork held on for all three points. 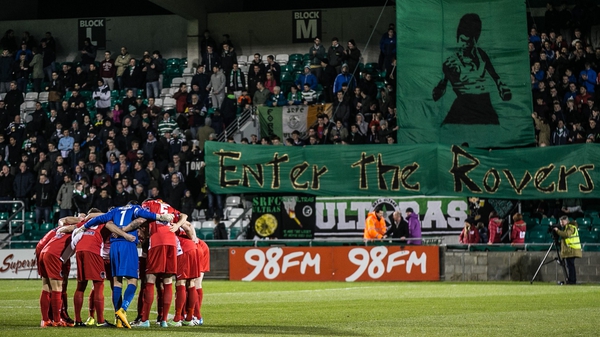