Rafael Benitez's Napoli all but booked their place in the Europa League semi-finals with a stunning 4-1 win over Wolfsburg in Germany on Thursday night.

Gonzalo Higuain scored the first before Marek Hamsik helped himself to a brace in the first leg of this last-eight clash.

Substitute Manolo Gabbiadini piled on the misery as the visitors inflicted a first home defeat on their opponents since they lost to Everton in November.

Nicklas Bendtner grabbed a late consolation for the hosts, but they looked a completely different side to the one which brushed aside Inter Milan in the last round.

Substitute Khouma Babacar's goal in stoppage-time gave Fiorentina a 1-1 draw and a crucial away goal in their quarter-final first leg against Dynamo Kiev.

The Italian side had started the game strongly, but were stung by Jeremain Lens' deflected opener before half-time and looked to have faded.

The game tailed off in the second half - until the 92nd minute, when Babacar's intervention dramatically altered the momentum of the tie. 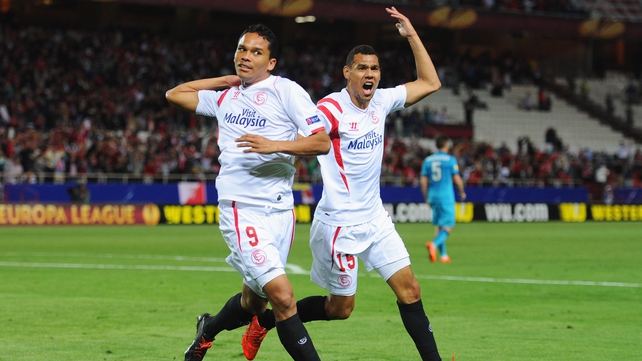 A glorious late strike from Denis Suarez helped Sevilla come from behind to beat Zenit St Petersburg 2-1 in the first leg of their quarter-final in Spain.

The on-loan Barcelona forward was leaning back as he stretched to reach fellow substitute Stephane Mbia's cross, but the resulting volley had a wicked loop on it to beat the goalkeeper in the 88th minute.

Fifteen minutes earlier, Carlos Bacca had headed Sevilla level, with Alexander Ryazantsev having put Zenit ahead after half an hour.

It seemed harsh on Zenit, who had enjoyed long spells on top but struggled to contain Sevilla in the brief spurts during which they did turn it on.

Club Brugge were held to a goalless draw against Dnipro at the Jan Breydel Stadion.

The closest either side came to scoring was in the 27th minute when Brugge striker Jose Izquierdo found himself through on goal, but Dnipro goalkeeper Denys Boyko kept his composure to save brilliantly when Izquierdo seems odds-on to score.