Cesc Fabregas scored an 88th-minute winner as Chelsea restored their seven-point lead at the top of the table with a 1-0 victory at West London rivals QPR.

Jose Mourinho's side had failed to register a single shot on target before Fabregas' late strike and it was Rangers who enjoyed the better of a disappointing game, with Matt Phillips squandering an excellent chance in the second half.

Fabregas, however, broke the home side's heart with his fifth goal of the season to keep Chelsea's title charge firmly on track, while QPR remain 18th and two points adrift of safety.

Roman Abramovich's 700th game as Chelsea owner was certainly not in keeping with his aspirations of flash, free-flowing football but the Blues have developed a resilience this season that looks likely to earn a fourth league title under the Russian's stewardship.

Rangers meanwhile played with a renewed confidence after taking four points from consecutive away matches at West Brom and Aston Villa, but with matches at Liverpool and Manchester City still to come, their chances of survival look now to be hanging by a thread.

Chelsea dominated the opening quarter of an hour but a swirling wind and bobbly pitch meant the visitors struggled for fluency with only Willian going close in the eighth minute with a cross that struck the post.

Rangers were disciplined in their pressing, forcing their opponents into a number of sloppy touches and misplaced passes but neither side were able to create anything close to a clear-cut chance during a drab first period.

The home support were temporarily cheered when John Terry was thrown to the ground in a scuffle with Charlie Austin and in the 44th minute, the Rangers striker had the game's first shot on target, his long-range effort drawing a comfortable save from Thibaut Courtois.

Austin's battle with Terry resumed shortly after the interval when the Chelsea captain felt Austin left his foot in longer than necessary on Courtois after the Blues keeper had collected a shot from Clint Hill.

Rangers enjoyed a strong spell midway through the second period and should have opened the scoring when Phillips, turning Nemanja Matic in the box, engineered a clear sight at goal but Courtois was again on hand to palm away the finish.

There was a hint of panic in the Chelsea defence as QPR piled forward late on and when Courtois fumbled Austin's shot in the 82nd minute, it looked like it might fall to a Rangers shirt but the Blues stopper gathered just in the nick of time.

The hosts looked the more likely to snatch victory in the latter stages but when the winner came it went to Chelsea, as Eden Hazard exchanged passes with Oscar on the left before laying on Fabregas to slide past Rob Green and into the net.

Rangers pushed forward in search of an equaliser in stoppage time but it was the away fans who were left singing at the end as the Blues' march towards the title continued. 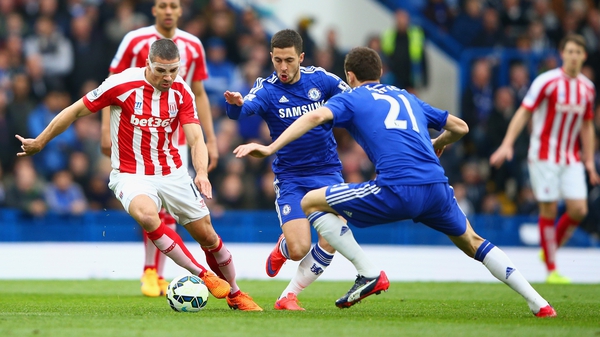 Mourinho insists Hazard is the best in the league