Southampton's faint top-four hopes were given a boost as James Ward-Prowse and Graziano Pelle ended long goal droughts to leave Hull deeper in the relegation mire.

This has been a remarkable season at St Mary's, with Ronald Koeman's side confounding the naysayers to such an extent that a highest finish in three decades is a realistic prospect.

Bettering the fifth place of 1985 looks a big ask but not impossible after Ward-Prowse's penalty and a late Pelle strike secured Saints a hard-fought 2-0 against embattled Hull, seeing them level last year's best-ever Premier League points tally of 56.

This was City's sixth straight loss to Southampton and leaves Steve Bruce's side worryingly close to the relegation zone with an unenviable run-in lying in wait.

There were times when the Tigers threatened to secure a first win on the south coast since 1951, with Sone Aluko proving a nuisance and Jake Livermore forcing Kelvin Davis into a save early in the second half.

They were made to rue those missed chances and possibly the decision to pick Steve Harper ahead of out-of-sorts Allan McGregor when Alex Bruce fouled former City team-mate Shane Long.

McGregor has saved the two previous penalties City have conceded this season, but Harper was unable to stop Ward-Prowse's venomous strike - his maiden league goal and a first for the club in all competitions since January 2012.

Pelle's wait has not been quite as long but would have been even more relieved to find the net. Having seen a James Chester header cleared off the line by Ryan Bertrand earlier, Saints ensured there would be no nervy ending when the Italy international slotted home his first league goal since December 20. 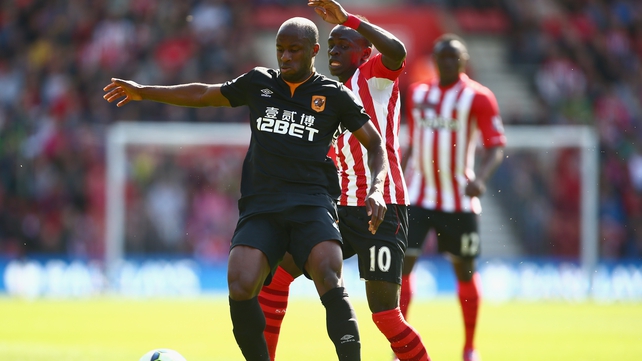 Ahead of this match, eyebrows were raised by Koeman's decision to leave England right-back Nathaniel Clyne on the bench as one of three changes.

Hull counterpart Steve Bruce plumped for five alterations and one of those quickly made an impression.

Aluko certainly justified his inclusion early on, scooping wide after an uncharacteristic Toby Alderweireld mistake before driving past Maya Yoshida and forcing Kelvin Davis into a save.

Dame N'Doye was next to get an effort away as the Tigers continued to impress against a Southampton side lacking the visitors' determination and composure.

Long's overrun one-on-one and a miscued Morgan Schneiderlin volley was all Saints could muster until the 20th minute, when Harper raced off his line to impressively deny Pelle.

Aluko came close to capitalising on the fine save by whizzing a left-footed strike just wide from 25 yards, while Stephen Quinn should have done better than volleying into the ground shortly afterwards.

The chances soon dried up, though, as the first half ended sloppily, with Alderweireld's stoppage-time attempt the only effort of note.

Ward-Prowse replaced the booked Victor Wanyama when play resumed after half-time - a period which was just eight minutes old when Davis shifted his body impressively to get down to deny Livermore from 20 yards.

It was a missed opportunity Hull were punished for shortly afterwards as Alex Bruce foolishly gave away a penalty.

The City defender held his head in his hands after clattering Long and Ward-Prowse, having persuaded Sadio Mane to give him the ball, fired into the top right-hand corner.

The penalty was the 20-year-old's first league goal for Saints and one which would have been cancelled out moments later had Bertrand not cleared Chester's glancing header off the line.

N'Doye came close to latching onto a cross and Paul McShane headed wide as City continued to push for a leveller which would never arrive.

Instead, Southampton doubled their advantage as the clock wound down.

Italy international Pelle may have scored against England recently but he had not scored a league goal since December 20, so the relief was clear when he tucked home Morgan Schneiderlin cutback.

Steven Davis wasted a glorious late chance to add extra gloss to the scoreline, which would have been harsh on the struggling visitors. 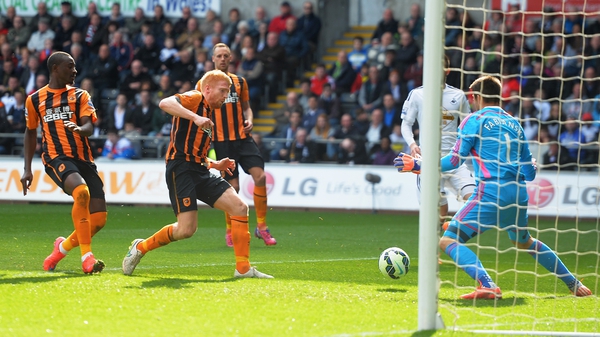