A second-half four goal blitz earned Bray Wanderers a second win on the spin under caretaker manager Maciej Tarnogrodzki as they stunned Limerick at the Carlisle Grounds.

Adam Hanlon broke the deadlock to give Bray the lead on 55 minutes.

The victory lifts Bray to ninth in the Premier Division table and leaves Limerick, who remain without a win, bottom on goal difference.

In a lively opening on a much improved looking surface, Bray, buoyed by their first win of the season in Sligo last week, started vibrantly, carving the game’s first opening on eight minutes.

Peter McGlynn’s clever pass found Cassidy in space in the Limerick area. The skipper looked to curl his shot into the far corner, but was a foot or two wide.

Limerick passed it well, though, and got a good foothold in the game, forcing four corners in quick succession. Darragh Rainsford had a sniff of goal on 16 minutes following a sliced attempted clearance by Stephen McGuinness, though it was well wide of the target.

Bray keeper McGuinness had to be at his best two minutes later when parrying well from a Sean Harding drive with the ball cleared for a fifth Limerick corner.

Bray enjoyed a little spell of pressure with Hugh Douglas heading off target from a Ryan McEvoy corner before Limerick wasted a real chance on 31 minutes.

Sean Russell’s ball into the home box dropped nicely for Dean Clarke, but the striker’s hurried volley blazed over the bar.

Limerick keeper Conor O’Donnell then kept the sides level with his only save of the first half on 35 minutes. Narrowing the angle well, O’Donnell got his body in the way to stop Cassidy’s shot after Hanlon and Gareth McDonagh worked the opening.

Paul O’Conor shot wide before slicing a shot which McGuinness saved at the other end as the sides remained level at the interval.

After a slow start, the second half came a live to deliver the opening goal ten minutes in.

Limerick were caught short at the back on the counterattack. Cassidy and Hanlon broke with the latter finally shooting home after getting a fortunate ricochet.

Cassidy then got the goal of the game to seal it on 71 minutes.

Working a one-two with Onwubiko, Cassidy slalomed past two defenders to bring a parry save from O’Donnell.

The ball came back to him, though, and the Wanderers attacker added to his hat-trick last week when following up to shoot home.
Onwubiko then set up midfielder Kelly to rifle home the fourth goal right on 90 minutes. 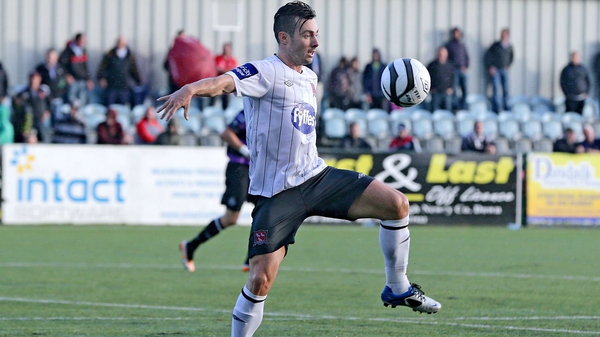