Marc Griffin struck for 10-man Bohemians in the 88th minute as they took full points against Drogheda in a hugely controversial match in the SSE Airtricity League.

Derek Prendergast got his marching orders in the 20th minute for a second bookable offence when the foul seemed to be committed by teammate Lorcan Fitzgerald.

Bohemians actually picked up their game in the second quarter and reached half-time still on level terms thanks to their keeper Dean Delany who saved a debatable stoppage-time penalty from Daryl Kavanagh.

The Gypsies were pinned back in the latter stages and Lee Duffy had a goal-bound chip deflected onto his own crossbar by Lorcan Fitzgerald before Bohs won it at the death with substitute Griffin’s effort.

Bohs moved the ball around with purpose in the early stages, but Drogheda made better use of the possession they had to create some early chances, with Lee Duffy seeing a shot deflected behind and then having a cheeky back-heeled effort blocked by Prendergast.

Daryl Kavanagh then did very well  to drive in a cross from the right towards Stephen Maher whose first-time shot was pushed away by Bohs keeper Dean Delany.

But the game really exploded into life when Prendergast was bizarrely sent off for a second bookable offence in what seemed to be a case of mistaken identity.

The former Drogheda captain had been booked for bringing down Daryl Kavanagh in the 18th minute, and when Lorcan Fitzgerald committed a similar foul on Cathal Brady it was Prendergast who received a second yellow card despite protestations from both Bohs men that Mr McLaughlin had got it wrong.

After that it was hard to tell which team was a man down coming up to half-time as the visitors raised their game, but when Bohs conceded a penalty in another hugely controversial moment in stoppage time, it seemed that Drogheda would get their noses in front.

This time Anto Murphy got a yellow for an innocuous tackle on Maher in the box, but Delany dived to his right to save Daryl Kavanagh’s tamely struck spot kick.

The second half began with Drogheda probing for an opening with the extra man but with little effect as their passing became increasingly ragged, and it was no surprise to see the hosts make the first change, with Sean Brennan replacing Michael Scott.

Bohs had them stretched in the 61st minute when Paddy Kavanagh released Dean Kelly and the striker’s cross-shot almost crept in at the far post before being cleared by Brady.

Drogheda skipper Michael Daly finally gave the home fans something to shout about with a first-time shot from 35 yards that had to be tipped round the post by Delany.

But Bohemians were still matching the home side and looking dangerous on the counter and Drogheda made another change, swapping Mark Hughes for Shane Dunne.

Daryl Kavanagh headed straight at Delany and the keeper saved a shot from Maher as a few gaps began to appear in the visitors’ defence.

Drogheda almost got the lead goal on 87 minutes when Delany was caught off his line as he punched clear from a corner kick and Lee Duffy chipped the ball towards the empty goal, only for Lorcan Fitzgerald to head the goal-bound effort against his own crossbar.

Then, with Bohs seemingly on the back foot, they broke out in the 88th minute and their two substitutes combined, with Keelan Dillon teeing up Marc Griffin who chipped over the exposed Micheal Schlingermann in the Drogheda goal. 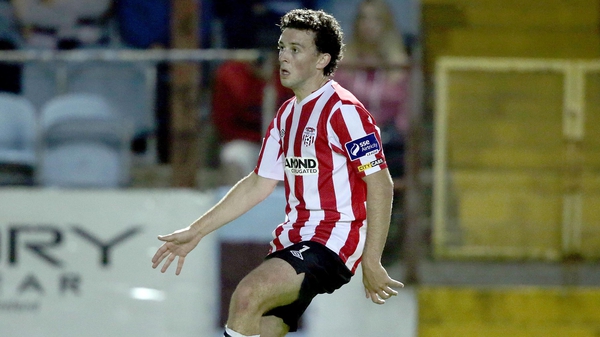