Bray Wanderers moved off the bottom of the SSE Airtricity League Premier Division with their first win league win of the season as they beat Sligo Rovers at the Showgrounds.

The Seagulls profited from a David Cassidy hat-trick, with Steven Beattie netting Rovers' only goal of the night.

Both teams ended the game with ten men. Adam Mitchell was dismissed just before the half-hour mark, while Sligo's Keith Ward was given his marching orders early in the second half.

The home side were searching for their first league win of what has been a terribly disappointing start to their season and they almost had the perfect start.

Kevin Devaney and Dinny Corcoran combined, but Bray's Hugh Douglas was positioned at the right place at the right time as he cleared Corcoran's goal-bound effort.

Bray, bottom and without any points going into this tie, took the lead with seven minutes played after they were awarded a penalty when Cassidy was tripped by Ryan Coulter inside the area.

The former Shelbourne man stepped up and slotted home from 12 yards to give Wanderers the lead.

Sligo were sloppy throughout, but managed to level the game with 17 minutes played.

Alan Keane was given ample space and time on the right as his over-hit cross was directed back towards goal by Devaney. Bray had switched off and Beattie reacted the quickest as he slotted the ball into the corner of Stephen McGuinness' net.

Stephen Folan nodded Keith Ward's free-kick narrowly over the Bray crossbar in the 29th minute, eight minutes before Wanderers' game plan was set askew when they were reduced to ten men.

The last defender, Mitchell nudged Corcoran as the striker latched on to the end of a through ball over the top from Wardm, causing the former Bohs man to tumble to the ground.

Referee Padraigh Sutton immediately went to his back pocket as he dismissed the centre-half.

It was then Sligo's turn to feel the wrath of Sutton as Bray were awarded another penalty on the stroke of half-time.

Keane tugged Ryan McEvoy's shirt as the midfielder attempted to control the ball at the back post following a Bray corner.

Sutton pointed to the spot and Cassidy blasted the ball past Coulter for the second time as Bray led at the break.

John Russell headed his effort on to the Bray crossbar from point-blank range just three minutes into the second period and David Cawley swept his shot from the edge of the area wide seconds later.

Sutton then produced his second red card of the night in the 52nd minute. Ward was issued his second booking of the contest as he headed the ball out of the hands of McGuinness as he prepared to release it.

The Bray netminder did well to claim Devaney's header under his post three minutes later after the winger jumped highest to meet Russell's corner.

Corcoran then passed up a golden opportunity to equalise in the 67th minute as he somehow, unmarked, shot wide from inside the six yard box from a Russell cross.

Bray were only too happy to show Rovers how it should have been done shortly afterwards. Cassidy grabbed his third with their only shot on target of the half. Adam Hanlon produced the cross and Cassidy ghosted unnoticed between both Sligo centre-halves and easily tapped the ball past Coulter for his hat-trick.

Sligo pressed hard for a way back into the game but - not for the first time this season - were found wanting in the last third of the field, with Daniel O'Reilly blocking Corcoran's late chance as Maciej Tarnogrodzki's side took all three points. 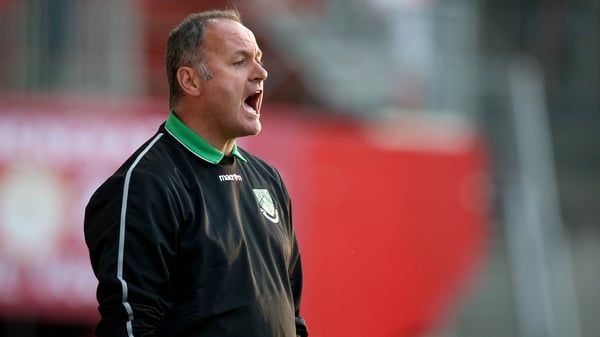