Eamon Dunphy has heaped praise on Republic of Ireland midfielder Wes Hoolahan following his man-of-the-match performance in Sunday’s Euro 2016 qualifying Group D 1-1 draw against Poland, but blasted the displays of a number of the Norwich playmaker’s team-mates, including skipper Robbie Keane, whom he labelled "feeble".

Hoolahan, who has racked up just 18 appearances on the international stage, pleased many at Aviva Stadium and delighted Dunphy with his incisive play.

Speaking to RTÉ Sport, the analyst said: “I thought it was very good after the first 30 minutes.

“Wes was playing up front with Robbie Keane, which was kind of stupid.

“But then he made a change, he brought Jon Walters in to play beside Robbie Keane, he gave Wes a freer role and he swapped McGeady around to the right wing.

“In the last 10-15 minutes of the first half we threatened.

“Wes started getting on the ball - he played a couple of divine passes, really beautiful stuff. He makes things happen.

“We came out in the second half and we really played, all driven by Wes, really.

“Wes Hoolahan didn’t start against Georgia, he didn’t start away to Germany, and when he did come on we picked up and scored an equalising goal, yet the manager says he might only play him at home.”

While Dunphy was glowing in his praise of the 32-year-old, his appraisal of a number of other Ireland players was typically withering.

Glenn Whelan, not for the first time, found himself a target for the former Millwall stalwart’s trademark invective.

“Whelan can’t play at all, he doesn’t do anything,” Dunphy opined.

Everton’s James McCarthy may continue to win admirers for his Premier League displays, but Dunphy isn’t a believer in the attributes of the Glasgow-born star.

“McCarthy is turning out to be a terrible flop. He doesn’t do anything,” he said.

“He’s a hyped player. He’s a player that everyone thinks is far, far better than he is. We haven’t got time to waste with Whelan and McCarthy.

“We have Stephen Quinn, who is a very, very good player. A good young busy player always looking for the game, looking to do things.

“He should have started last night. We didn’t get where we are by accident.”

The analyst was also blunt in his assessment of captain Keane. Asked if the LA Galaxy striker, 34, was past it, Dunphy said: “Yes. And has been for a while.

“He’s playing in a poor league. But I’ve got the height of regard for him and respect for him - look at his goalscoring record.

“He had a half-chance last night and he did well with the header, but I don’t think his legs will get him around the field and that’s the problem.

“They had to augment him by bringing in Jon Walters, who isn’t past it.

“And if you ever watch MLS you'll see why, because it's a pretty poor league he's playing in.” 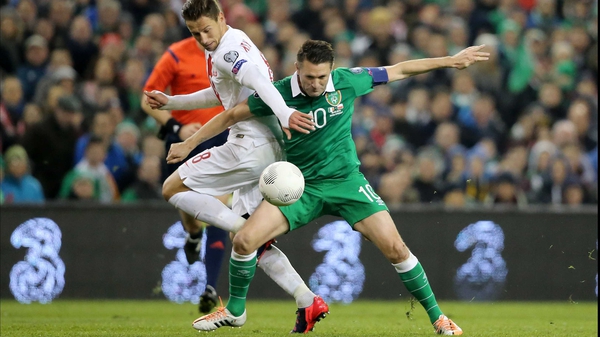