UEFA has charged Montenegro after their Euro 2016 qualifier in Podgorica was abandoned following Russia players being hit by missiles.

The Montenegro Football Association (FSCG) has been charged with holding a match that did not get played in full, and for fans throwing fireworks and missiles.

The Russian football union (RFS) has also been charged for the setting off/throwing of fireworks and objects by their spectators.

Russia have lodged a formal complaint with UEFA and demanded they be awarded a victory after the abandoned match on Friday.

The match in Podgorica was abandoned after 67 minutes with the score still at 0-0 after Russia's Dmitri Kombarov was hit by an object, which led to a melee between the players.

The game had already been suspended once, in the first minute when the Russia goalkeeper Igor Akinfeev was struck on the head by a flare and was taken to hospital for treatment for burns.

Play resumed after a 33-minute delay and the start of the second half was also delayed by 18 minutes due to further disturbances.

The eventual abandonment came shortly after Russia's Roman Shirokov had a penalty saved by Vukasin Poleksic.

UEFA announced on Monday: "Disciplinary proceedings have been opened against the Football Association of Montenegro (FSCG) for the setting off and throwing of fireworks and objects by their spectators and for holding a match that did not get played in full.

"Proceedings have also been opened against the Football Union of Russia (RFS) for the setting off/throwing of fireworks and objects by their spectators.

"A protest has also been filed by the RFS and disciplinary proceedings have been opened."

Russia and Montenegro are neck and neck in Group G in third and fourth place, both on five points after four matches. 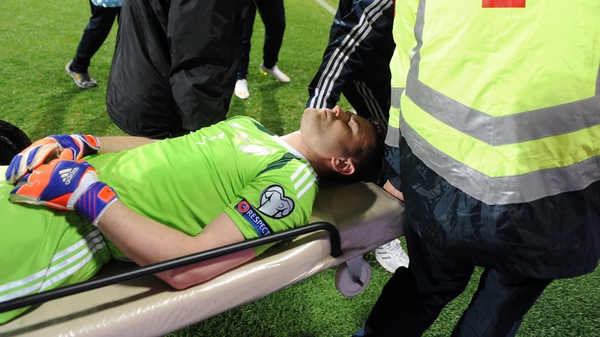