Ireland goalkeeper Shay Given admitted that he was delighted to be back playing in a competitive fixture and believes that there is a healthy competition for places in the current squad.

Given made his first competitive start since losing to Italy at Euro 2012 as Ireland fought back to draw 1-1 with Poland at the Aviva Stadium, and the Aston Villa stopper feels that there is a healthy battle for places in the current team with two or three players vying for each position.

Speaking to RTÉ Sport after the match, Given said: “I was delighted to play. It’s been a while since I played a competitive game, but I was delighted the gaffer gave me the nod ahead of the game.

“I didn’t have much to do during the game, to be honest, but it’s great to come out in front of the crowd here in Dublin and with a great atmosphere as well. I enjoyed every minute of it.

“We need that competitive edge and we need everyone to be fighting for their position and we are doing that. We have a very good squad of players and there were some players who didn’t even tog out tonight and didn’t even make it on to the subs bench.

“There are two or three players who can play in every position and everyone is fighting for the jersey. And that adds to the competition, as you don’t want to disappoint because you want to play in the next game. So it’s nice to have those numbers.”

And the former Manchester City man was very impressed with the side’s second-half performance and believes that the point earned may be a very valuable one in the race to qualify for next year’s championships.

“It’s a big point,” said Given. “And because the goal was so late for ourselves, you have to take it as a positive. The second-half performance was much better than the first half, we were disappointing in the first half, and I think we put that right in the second half.

“We could have won the game. In the second half, we hit the post a couple of times and (Lukasz) Fabianski made a couple of good saves as well so if any team were going to win, it was us.

“It’s just a shame that Shane didn't score that bit earlier as we might have had a grand finish and got a second one. But come the end of the qualifying campaign it might be a huge point.”

And 38-year-old Given, who was picked in place of regular keeper David Forde, also admitted that it was a poor goal to give away and that there was little he could do about the Slawomir Peszko strike, which handed Poland a first-half lead.

“It was a poor goal to give away. As a unit, we should have cleared the ball and the guy has nipped in and, to be fair, he has hit it pretty well. He probably couldn’t have connected with it any better as it sort of went past me in a blur. But it’s something that could have been avoided so we have to cut out these mistakes, of course.”

And so on to Scotland in June, in what now is a must-win encounter for Martin O’Neill’s side in the race for qualification. The Donegal man believes that it is a game Ireland can win, provided they take the positives from the Poland encounter.

“It’s a huge game but hopefully we can take this second-half performance in to the Scottish game. It won’t be easy but there’ll be a huge atmosphere and we have got to try to win that game.” 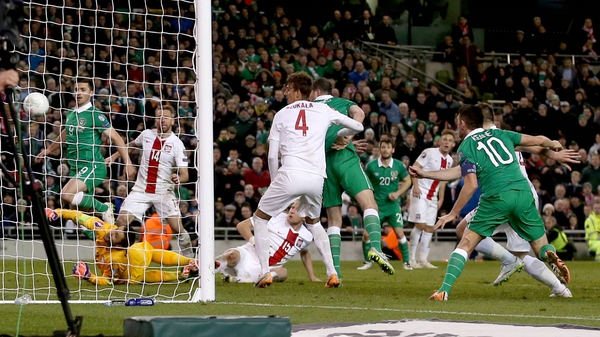 As it happened: Republic of Ireland 1-1 Poland