Germany will be more focused when the World Cup winners take on Georgia in Tbilisi on Sunday for their Euro 2016 qualifier after a lacklustre performance in their 2-2 friendly draw against Australia on Wednesday.

Coach Joachim Loew rested half a dozen key players, including Bastian Schweinsteiger, Manuel Neuer, Mats Hummels and Jerome Boateng against Australia and the lack of quality on the pitch showed at times as the bold Asian champions narrowly missed out on a shock win.

"This was a good test from which we can draw some conclusions," said Loew, who recently extended his contract to 2018. "But the team's tension will increase ahead of the Georgia game. We will be much more concentrated against them."

Loew fielded an experimental three-man backline that not surprisingly failed to shine given Shkodran Mustafi, Benedikt Hoewedes and Holger Badstuber, back after a two-and-a-half year absence, had never played together.

"We never really had our defence under control," Loew admitted but said he would continue experimenting as he looks to make his team more flexible, with his players shifting positions more often.

Better news for Loew was the return of Badstuber and Ilkay Guendogan, back for the first time since August 2013, after their long injury absences.

"You can't expect everything to work after such long absences. We did not apply things that we wanted to," said Loew. "But we know that we need to win on Sunday."

Lukas Podolski's 81st minute equaliser was a further positive point for the head coach with the out-of-form winger again delivering for Germany with his 48th goal to climb to third on the all-time scorer list.

"You can always count on Lukas to inject life into a game," Loew said of the player, who has struggled for form at Inter Milan.

Germany have been also been erratic in the qualifiers. They have managed seven points from four games, as many as Ireland and Scotland, with Poland three clear at the top of Group D.

With Germany in full force against Georgia few will bet against the World Cup winners leaving with three points to heave their qualification back on track.

With Toni Kroos, Thomas Mueller and the other players rested on Wednesday ready to take over, Germany remain the favourites to win as they chase after top spot in the group.

"It was certainly not the performance we were looking for against Australia," midfielder Sami Khedira said. "We are aware of how serious the situation is for the Euro qualifiers. But no one should be concerned." 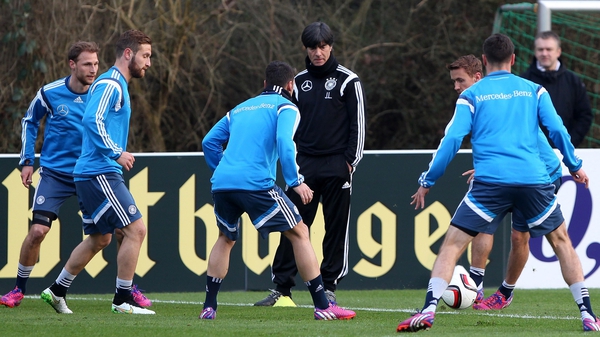 No new blood for Germany yet, says Joachim Low