After returning to the Aston Villa frame, Shay Given is desperate to break back into the Republic of Ireland first team, starting with the EURO 2016 qualifier against Poland on Sunday night.

The 38-year-old goalkeeper plays second fiddle to Brad Guzan in the Premier League for the struggling Villans but has been favoured for the FA Cup run, which has seen his side reach the semi-finals.

Given came out of international retirement at the start of this campaign but has not managed to unseat the incumbent David Forde, who has started all four games to date.

Speaking after training this morning, Given said: “I'd love to play. You want to play in the game because it is such a huge game.

“[To] get into the team is the first thing you want to do. Obviously, I don't pick the team, the manager makes the decision who is going to play.

"The goalkeepers in general, David, [Kieren] Westwood and [Darren] Randolph, we're all a tight team together. Whoever he picks, we'll support them as I said before.

“We're not going to go around two-footing them so you'll get a game or anything like that. You do wish them well, but at the same time your personal pride and professionalism, you want to play in the game.

“I just got to work hard in training. I've been sort of playing well at Aston Villa when given the chance as well and hopefully I might get the nod Sunday. But if not I'll support whoever [Martin O'Neill] picks.”

Ireland host Poland on Sunday evening (7.45pm, live on RTÉ2) and a win would see them join the current table toppers on 10 points.

The ex-Manchester City netminder stopped short of calling it a must-win game but declared that defeat must be avoided.

“We have all been here before. At this situation in the qualifying campaign, we know how important it is. It is a huge game of course and ideally you want to win your home games and take some points on the road as well.

"We need the Aviva to be really rocking. I think it's great it's a Sunday night. The lights and the atmosphere, I think it will be extra special as well. We really need the fans to be right behind us from the first minute.”

Meanwhile, Given’s club-mate Jack Grealish picked up the Under-21 player of the year award last night and indicated that he would come back into the Ireland set-up soon, having previously told boss Noel King that he wanted to concentrate on breaking into the first team at Villa.

There have been numerous reports linking the 19-year-old with a switch to his native country but Given was encouraged by the comments made by Grealish at last night’s FAI awards.

"Yeah, it's good to hear, it's all from taking a year out as well and I never heard one that before," grinned Given.

"It's like he turned into a student and took a gap year, it's great that he's had a nice rest and he's going to come back in.

“It was nice to see his family there as well last night and I think his gran is from Kerry.

"Hopefully, even being there last night, coming across and seeing how much support the nation has for him will make him make the right decision.

"He's a class player. He obviously wants to play more for Villa as well, but he's still very young and [manager] Tim Sherwood is just sort of letting him in gently into the team.

"But I think he has the right manager that will get the best out of him and hopefully he has a big future ahead of him." 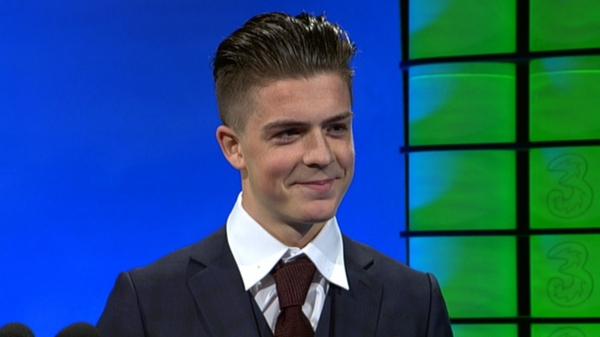