Neil Yadolahi was the Drogheda hero as his headed goal secured an excellent come-from behind win against a more fancied Sligo Rovers side.

It took Sligo just seven minutes to break the deadlock, Dinny Corcoran heading home against one of his old clubs, but Drogheda levelled with a similar effort from Daryl Kavanagh.

Sligo deservedly edged 2-1 ahead when Gavin Peers nodded in a corner kick, but the Drogs dug deep in the second half and levelled again just after the hour mark through Cathal Brady.

The Boynesiders made an encouraging start and Yadolahi headed over the bar from a Joe Gorman corner kick, only for Sligo to strike from their first meaningful attack of the game in the seventh minute.

For a five-minute spell after that Sligo poured forward and looked odds-on to add to their tally, with Steven Beattie going closest with a 30-yard drive that whistled just wide.

Yet it was the home side who restored parity in the 16th minute with a well-crafted goal of their own. Michael Daly’s initial cross from the right wing just missed the head of Sean Thornton, but Jason Marks retrieved the ball and delivered a measured centre towards Daryl Kavanagh, who guided his header past Sligo netminder Ryan Coulter.

It continued to be an open contest after that and Cretaro had the ball in the net after a sliced clearance by Yadolahi put the home side in trouble. However, referee Robert Harvey rightly ruled out the goal for a foul on Schlingermann moments before.

The home side had another escape when Cretaro led a speedy counter-attack and the ball eventually found its way to Beattie whose low shot was turned round the post by Schlingermann.

The Drogs keeper made further saves from Devaney and Corcoran and so it was no surprise when Sligo restored their advantage on 36 minutes.

It was a disastrous goal from the Boynesiders’ point of view as Gavin Peers was left totally isolated as he met a Russell corner and nodded past Schlingermann, who seemed a little bit slow to react.

Straight after half-time Drogheda’s netminder made a double-save from Devaney to keep his side in the game, but it wasn’t one-way traffic and Marks went close with an angled shot in the 57th minute.

Schlingermann continued to work overtime, making further saves from Russell and Peers, while Joe Gorman cleared off the line from Corcoran.

But somehow the Drogs hauled themselves level for the second time on 63 minutes.

Kavanagh was the provider this time with a ball over the top towards Cathal Brady, who took it in his stride and sent a low shot in off the inside of the post.

Even better was to come for the home side as they edged 3-2 in front just six minutes later. A foul on Stephen Maher gave Thornton an opportunity to swing in a free kick and Yadolahi climbed highest in the box to send a header looping over Coulter.

Drogheda visibly grew in confidence after that and defended tenaciously to keep their lead intact, while Sligo seemed to run out of ideas, although it took a late goal-line clearance from Alan Byrne to deny Devaney an equaliser. 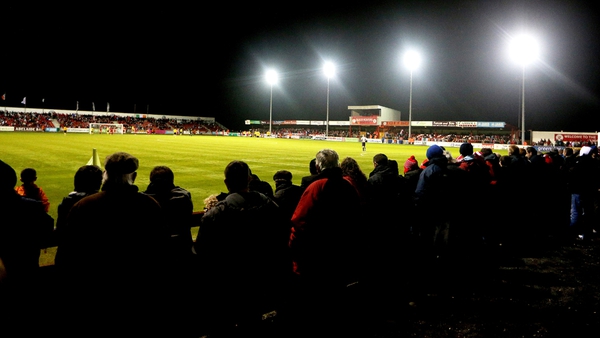