By Gavin McLaughlin at The Brandywell

On a night when it seemed to rain down with goals in the Airtricity Premier Division, it took just one for Dundalk to secure all three points against Derry City at The Brandywell.

Not for the first time, it was Lilywhites full-back Dane Massey who popped up with the vital score, his 65th minute drive giving the champions a 100% record after two games.

Derry City, who gave a good account of themselves in front of a packed crowd at The Brandywell, never really recovered from the blow and Dundalk saw it out to maintain their fine start to the season.

Anthony Elding, Stephen Dooley and Seanan Clucas all missed out for The Candystripes but Peter Hutton was able to call upon the services of goalkeeper Ger Doherty who overcame a hip problem while Ryan McBride and Mark Timlin made their return from suspension.

Dundalk arrived to the Walled City with only captain Stephen O’Donnell on the missing list. Darren Meenan, making his return from suspension, had to be content with a place on the substitutes bench with Stephen Kenny naming an unchanged XI from the side the beat Longford Town in their opening game.

At the age of 33, Doherty is Derry’s most experienced player and he showed his worth after just four minutes, smartly saving from David McMillan who did well to nip in front of Shane McEleney to stab Dane Massey’s cross towards goal.

The league champions continued to hold the upper hand without ever opening the Candystripes open. Richie Towell was next to test Doherty, the keeper deflecting his effort onto the woodwork although the assistant’s flag had already been raised for offside at that point.

Doherty almost blotted his copybook just short of the half hour mark when his kick went straight to the head of John Mountney on the right. The Dundalk winger headed straight into McMillan’s path but Doherty redeemed himself, rushing from his penalty area to block the effort; a gilt edged opportunity squandered by the visitors.

Dundalk always looked the more likely and the Derry backline was called into action again in the 39th minute, Shane McEleney having to head over his own bar after Richie Towell had picked out Massey with a free-kick to the far post.

Willed on by a packed Brandywell, Peter Hutton’s young charges showed plenty of endeavour but rarely troubled the Dundalk backline with Lilywhites goalkeeper Gary Rogers going into the dressing room without having a save of note to make in the opening period.

If the first-half was drab, the second proved to be a cracking affair. Dundalk opened with intent and Doherty had to tip a Finn drive from 18-yards over the top after Barry McNamee scuffed his clearance.

The hosts responded well and they had the champions on the ropes for a spell. Shaun Kelly’s 51st minute cross from the right was shanked over the top by Philip Lowry and Kelly was involved again minutes later, his cross picking out Ryan Curran who saw a couple of efforts blocked by those in black shirts.

Mark Timlin then looked as though he had breached the Dundalk backline from Patrick McEleney’s incisive pass but Dane Massey recovered to get back and make a fantastic sliding tackle.

Ronan Finn was heavily involved, his threaded pass on the edge of the penalty area falling perfectly into the path of the overlapping Massey who drilled his effort low and hard into Doherty’s bottom left hand corner.

That goal seemed to kill Derry’s resistance and although there were a couple of heart stopping moments in the latter stages, Dundalk held on to record victories in their opening two top flight games for the first time since 1988. 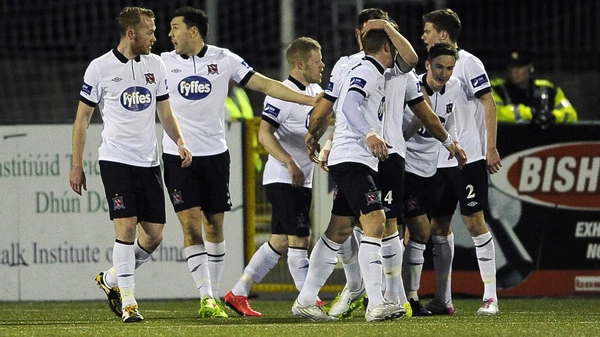