Rampant Bayern Munich humbled 10-man Shakhtar Donetsk 7-0 on Wednesday to ease into the Champions League quarter-finals and equal the biggest win in the competition's knockout stages.

After a goalless first leg it was expected to be a close game but it turned into a stroll for the five-times European champions thanks to the third-minute dismissal of Oleksandr Kucher.

Mario Goetze was brought down in the box by Kucher and Thomas Mueller converted the spot-kick.

It was the fastest red card in Champions League history from the start of a game and Mueller's fourth goal in the competition this season, all from penalties.

The early setback forced a complete change of plan for Shakhtar coach Mircea Lucescu, who brought on defensive midfielder Serhiy Kryvtsov as Bayern pressed on.

Arjen Robben missed a huge chance to double the lead after narrowly failing to connect with a Robert Lewandowski cutback in front of an empty goal.

The Dutchman's thundering drive then sailed over the bar before he went off with a thigh injury after 19 minutes.

The substitution did nothing to take the pace out of the Germans' attacks, with the hosts hitting the post from a well-placed placed Robert Lewandowski header.

Jerome Boateng did better in the 34th, tapping in on the rebound after a Lewandowski shot was temporarily cleared with Shakhtar's defence in complete disarray.

The Bavarians picked up after the break where they left off with two quick goals from Franck Ribery and Mueller, who joined Mario Gomez on 26 goals as the best all-time German scorer in the competition, to kill off the tie.

Defender Holger Badstuber scored his first goal since coming back from injuries that ruled him out for two years before Poland striker Lewandowski also got on to the scoresheet.

Goetze made sure of a mention in the record books with the seventh goal of the evening. 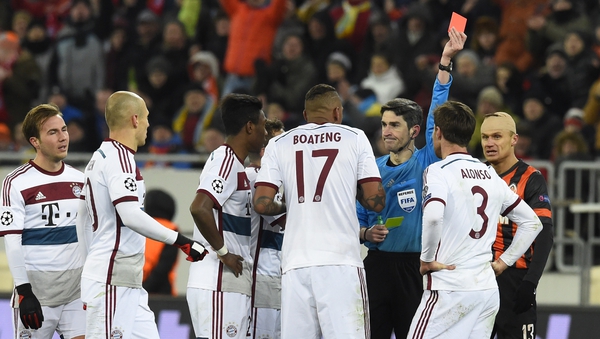