Bayer Leverkusen coach Roger Schmidt has told his players they will need to find another gear if they are to overcome Champions League opponents Atletico Madrid - a side "nobody likes playing against".

The German outfit are looking to claim their first win in a last-16 tie since this stage of the competition was introduced in the 2003/04 season, but they are considered outsiders even by Schmidt to progress any further this time.

Leverkusen go into tonight's first leg having won just once in five Bundesliga matches since the winter break, dropping them to sixth in the standings, and Schmidt knows his team can ill afford to carry that form into a showdown with last season's Champions League runners-up.

He said at his pre-match press conference: "We have to play at a higher level than in the Bundesliga.

"The group stage was tough, but in this round even stronger opponents await. Atletico have a great mentality. Nobody likes playing against Atletico."

"The group stage was tough, but in this round even stronger opponents await"

Schmidt is not ruling out an upset, though, adding: "If we get a good result, everything is possible for the second match.

"We are the outsiders in this tie but we have two games. [Tonight] we will play the first 90 minutes of 180 and we have to show everybody that we can cause Atletico some problems. Finally, we need two perfect days to go through to the next round."

Leverkusen, who lost the 2002 final to Atletico's city rivals Real, are without the banned Omer for the game at the BayArena while Lars Bender has been struggling with a knee injury.

For Atletico, the injured Koke was the only player omitted from a 22-man travelling squad but there is a fitness doubt against Arda Turan for a match coach Diego Simeone expects to be tough, regardless of Leverkusen's recent results.

He said: "We're not guided by only two games, but by what they've done in the last four months.

"They're a very brave team who have always had the chance to win. They think offensively, have a great coach and are a hard-working side. They also have a lot of speed and are dangerous in space. That's what I'm focusing on, not just the last two games."

Atletico have won their last five two-legged ties against German opponents and have lost once in their last nine Champions League matches away from home.

Those sorts of records do not factor in Simeone's thinking either, though,

He added: "There are no favourites, especially in a knock-out tie. In those it depends on how you respond in a game. The rest is history, which is very nice, but stays in the books." 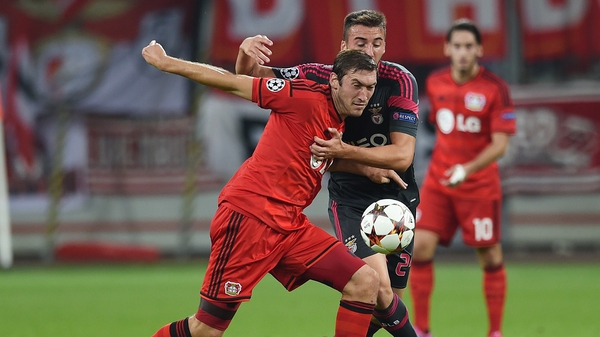