Swansea completed their first-ever league double over Manchester United to dent the Red Devils' hopes of finishing in the Champions League places.

The Welsh club had won 2-1 at Old Trafford on the opening day of the season but a repeat looked unlikely when Ander Herrera fired United into a 28th-minute lead.

But Ki Sung-yueng equalised within two minutes and Jonjo Shelvey's 73rd minute strike - which took a crucial deflection off team-mate Bafetimbi Gomis - gave Swansea only a second win in eight Premier League attempts as they prevailed 2-1.

United manager Louis van Gaal had claimed his side were the best in the top flight on current form after losing only once in 19 games in all competitions but performances have rarely matched results and this will do little for their ambitions of finishing in the top four.

Swansea started by changing their system with a diamond matching United's as Wayne Rooney again operated up front for the visitors with Robin van Persie replacing the misfiring Radamel Falcao following the FA Cup victory at Preston.

United were nearly the architects of their own downfall inside five minutes when Marcos Rojo's poor pass set up Gylfi Sigurdsson's blocked shot and a corner from which Swansea almost profited.

Sigurdsson sent the ball in and Gomis lost his marker Paddy McNair to power a header which Herrera hacked off the line.

Gomis put another header over after bar and Swansea were dangerous in attack but allowing Angel di Maria too much space to run into down the left flank.

And when Di Maria's corner evaded Lukasz Fabianski in the Swansea goal Van Persie collected at an acute angle to hammer a shot against the crossbar. 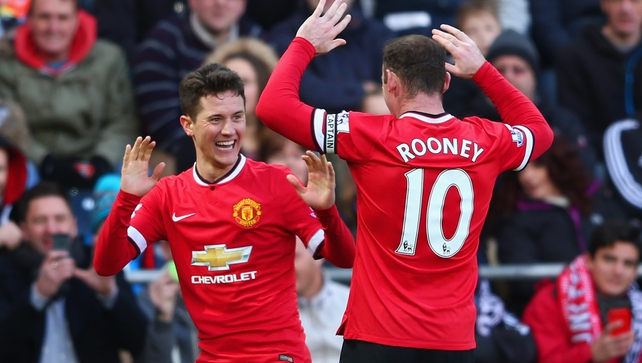 A hugely enjoyable encounter was swinging from end to end and Gomis slipped Phil Jones to set up a shooting opportunity for Wayne Routledge which David de Gea safely gathered.

But it was United who seized the lead when some fine approach play ended with Rooney finding Di Maria and the Argentina international set up Herrera's fifth United goal, and his second in as many games, with a precise finish into the corner.

Swansea's reply, however, was both emphatic and instant as Shelvey crossed from the left and Ki, just as he had done at Old Trafford in August, scored by getting across Luke Shaw and sweeping the ball home.

Ki went close to a second soon after half-time when he timed his run superbly onto another Shelvey cross and de Gea spread himself well to make the save.

Van Gaal's response to try and achieve dominance was to put on fresh legs at full-back, Ashley Young replacing Shaw after Antonio Valencia had been introduced at half-time for McNair.

United were enjoying the majority of possession with van Persie adding to a couple of wayward first-half efforts by smashing into the side netting on his more favoured left foot.

Rojo headed over a Di Maria corner and United were firmly in the ascendancy when Rooney lifted a ball over the top of the Swansea defence but Van Persie was only able to scuff his shot under pressure.

Swansea were clinging on but they relieved the pressure and struck against the run of play after 73 minutes when Shelvey's powerful strike beat de Gea with the aid of a deflection off Gomis.

The Frenchman brought another save from de Gea in the final exchanges as United ran out of ideas and were unable to pull off a late rescue act. 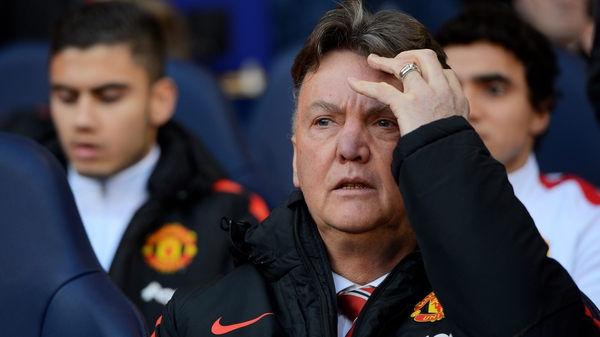