The Scottish champions dramatically came back from two down in the first-half after early strikes by Xherdan Shaqiri and Rodrigo Palacio with goals from midfielder Stuart Armstrong and an own goal from Inter defender Hugo Campagnaro within the space of a minute.

Hoops keeper Craig Gordon, so often a saviour for the Parkhead side since signing on a free last summer, had looked at fault for Inter's opener and another mistake a minute from the break gifted Palacio his second.

Both sides swapped attempts on goal in an open second-half but in the third minute of four added on, Guidetti, on loan from Manchester City but who had been out of favour recently, slammed the ball high into the net to send Parkhead into raptures and have everyone looking forward to the second-leg of the last-32 tie in the San Siro next Thursday night.

The fixture evoked memories of the Hoops' historic European Cup final win over the Italian outfit in 1967 - as well as their European Cup semi-final clash five years later where Inter triumphed in a penalty shoot-out - and it produced drama all of its own.

Celtic Park, full to its 60,000 capacity for the first time this season, rocked with noise in the build-up to kick-off but the Hoops fans were stunned when the Roberto Mancini's side took the lead in the fourth minute.

Midfielder Zdravko Kuzmanovic chipped the ball into the Celtic box to Shaqiri whose left-footed volley appeared to be going wide of the post before Gordon parried it back into his path.

At the second attempt the Switzerland international deftly steered an angled shot into the far side of the goal. 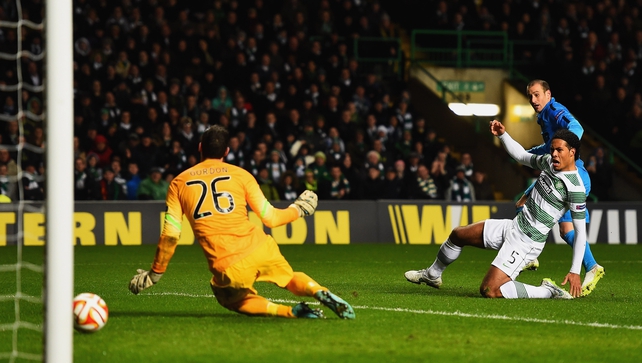 There was worse to come for the home side less than 10 minutes later when Shaqiri knocked a cleared corner back into the packed penalty box.

Emilio Izaguirre cannoned his clearance off fellow Hoops defender Virgil van Dijk and it dropped kindly to Palacio to rifle low past Gordon.

The tie looked all but gone for Ronny Deila's men, even at that stage, with the Celtic supporters fearing a third goal.

However, they watched their side battle their way back into the game.

After Stefan Johansen sent Adam Matthews scurrying into the box the Wales right-back pulled the ball back for Armstrong, making his European debut along with fellow new signing Gary Mackay-Steven, to drive in from 14 yards, thus giving the home fans some hope.

That hope turned to belief a minute later when Johansen's lobbed ball into the Inter box was turned past keeper Juan Pablo Carrizo by Campagnaro, under duress from Armstrong, as Parkhead exploded in joy.

However, Gordon was to endure further distress in the final minute of the first-half when he misjudged a skidding through pass by San Siro midfielder Gary Medel, the ball falling to Palacio to roll into the empty net.

Parkhead was subdued at the start of the second-half and held its breath as Palacio went clear again but this time his long-range effort was held by the Scotland keeper, who then made a decent save from Shaqiri.

At the other end, Hoops midfielder Nir Bitton went close with a long-range effort of his own before Carrizo denied Mackay-Steven with his foot.

In the 75th minute Deila replaced Armstrong with Liam Henderson and Griffiths with Guidetti, after the visitors had swapped Mauro Icardi for Mateo Kovacic.

Efe Ambrose also came on for Matthews as the Celtic fans anticipated a late surge but it was Gordon who had to beat away a powerful drive from Shaqiri.

But, with just over a minute remaining of added time, the visitors could hold out no longer as Guidetti fired high past Carrizo to send the Hoops fans wild with delight, although there was time for Gordon to make another save from Shaqiri.