Jordan Henderson feels Liverpool are more than a match for any team in the Premier League after they continued their excellent recent run with a 3-2 win over Tottenham.

The Reds are now firmly in the hunt for a to-four place after extending their unbeaten streak in the league to nine matches.
They now lie just three points behind fourth-placed Arsenal and Henderson believes they are capable of beating anyone put in front of them.

"We always feel we can beat anyone if we keep playing the way we have been," he said on BT Sport 1.

"We've got some fantastic players here so we've just got to keep working hard on the training field and getting results like that.

"We've got a little momentum, we've been playing some great stuff and I thought we showed great character tonight."

It looked set to be a frustrating night for the Merseysiders as Spurs twice fought back from a goal down.

Lazar Markovic's opener was cancelled out by the in-form Harry Kane, while Spurs levelled again, after Steven Gerrard had put Liverpool back in front from the penalty spot, through Mousa Dembele.

"We've got a little momentum, we've been playing some great stuff" - Jordan Henderson

It was a muted celebration from the Italian, although Henderson thinks his team-mate will be delighted with his contribution.

"I'm sure he'll be smiling in the dressing room. When he came on, he worked hard and got the goal and the three points for the team," he added. 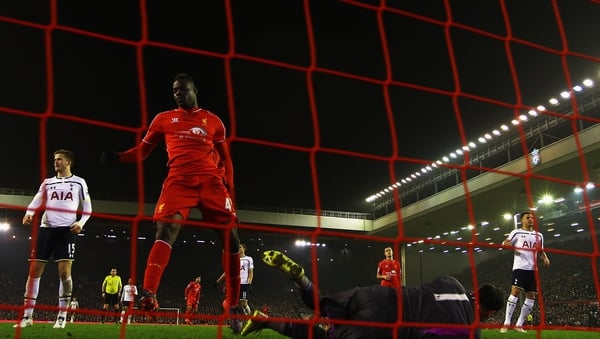 Balotelli wins it for Reds in five goal thriller