Hull City 2-0 Aston Villa
Dame N'Doye scored one and set up another on his full debut as Hull climbed out of the relegation zone at the expense of a brow-beaten Aston Villa.

The Senegalese striker, a £3million deadline day signing, was the key figure in a scrappy 2-0 victory that could nevertheless have a profound effect on both sides' battle against the drop.

He showed a fine first touch and good awareness to tee up Nikica Jelavic for the 22nd-minute opener and settled matters deep in the second half with a close-range finish.

After drawing with Manchester City at the weekend a rare win on home soil - just their third this term - confirmed a feeling of renewed optimism in East Yorkshire, with the Tigers up three places to 15th.

But for Villa, the outlook is grim. Not only does the result see them slump into the bottom three, it poses serious questions about their ability to bounce back.


Having ended their long goal drought in a losing cause against Chelsea on Saturday, normal service was resumed with a seventh blank in their last eight Barclays Premier League matches.

When they started without Christian Benteke, they looked bereft up front; when they added him at half-time they barely improved.
His role is now one of many questions manager Paul Lambert needs to answer before it is too late.

N'Doye, on the other hand, was quickly into the game, his first touch a neat drag back that left Fabian Delph challenging thin air.
He looked eager to assert himself but was too ambitious when sending a low shot straight at Brad Guzan from 30 yards.

Without Benteke's presence Villa seemed ill-equipped to take on Hull's three centre-halves and when Gabriel Agbonlahor did get in behind Paul McShane, he lost his footing before taking advantage.

Jake Livermore almost gifted the visitors an opening when his crossfield pass fell at Scott Sinclair's feet, but the Hull midfielder chased back and retrieved possession to atone for his own mistake.

The Tigers had hardly been electric up front but took the lead in thoroughly uncomplicated fashion.

Goalkeeper Allan McGregor launched the ball upfield where N'Doye cushioned it with a neat first touch before threading a pass for Jelavic.

The former Croatia striker went low with his shot but was fortunate to see a huge deflection off Ciaran Clark loop gently into the roof of the net for his seventh of the season.

Villa had been sucker-punched and their reaction was to fall flat, inviting further pressure for the next 10 minutes.

They had a solitary chance to level before the break, Tom Huddlestone conceding a free-kick in an inviting position, but Carles Gil's effort curled a yard wide.

There was, though, time for Clark to give N'Doye a proper welcome to English football, felling his man with a bone-crunching, entirely legal tackle.

Lambert made the logical switch at half-time, Benteke on for the ineffective Andreas Weimann, and how Villa needed the Belgian to locate his best form.

Despite having a full 45 minutes still to play, Benteke's arrival seemed to be Villa's only hope of changing the course of the game.

Almost immediately he lashed a shot wastefully wide from outside the area but having found his feet he unsettled Hull with a run into the box.

Just as he pulled the trigger Alex Bruce made a diving block and Benteke was unable to meet the resulting corner.

There were more changes either side of the hour mark, the enigmatic Joe Cole summoned in place of Sinclair to help feed Benteke and Hull swapping the goalscorer Jelavic with Gaston Ramirez.

Yet the changes in personnel could not lift proceedings from what was an increasingly tense scrap.

Hull seemed likelier to add to the scoring, despite committing fewer men forward as the minutes ticked past, and Robbie Brady should have done more with Livermore's clever pass.

It was N'Doye who made it safe in the 74th minute.

Ahmed Elmohamady's cross and Ramirez's header combined to pick out the striker at the far post and his instinctive first attempt was smothered at point-blank range by Guzan.

The second ball fell perfectly for N'Doye and with the goalkeeper now floored, he slotted his second attempt coolly into the net.

McGregor denied Villa a much-needed goal, beating out Ashley Westwood's drive then recovering to palm Benteke's follow-up over the bar. 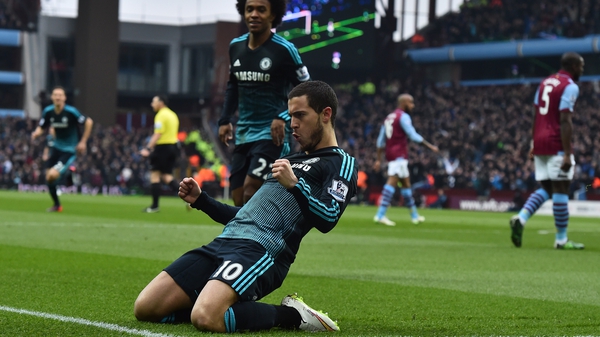