Real Madrid forward James Rodriguez is facing a spell on the sidelines after breaking a metatarsal during Wednesday night's 2-1 win over Sevilla.

Madrid opened up a four-point gap at the top of La Liga with the win, but it came at a price as Rodriguez - who opened the scoring with a diving header after 12 minutes - and Sergio Ramos both went off injured.

Madrid later confirmed a broken bone for the Colombian, who could be out for around two months.

A statement on the club's website said: "After the tests carried out on James Rodriguez by the Real Madrid medical services at the Sanitas La Moraleja Hospital, he has been diagnosed with a fracture of the fifth metatarsal in his right foot. The player will undergo surgery in the coming hours."

Ramos had been substituted after nine minutes with a hamstring problem, but it is unclear how long the defender may be sidelined.

"Sergio had a hamstring problem," manager Carlo Ancelotti said on the club website. "We cannot evaluate it yet. We must wait a few days."

Rodriguez's replacement in the match, namesake Jesse Rodriguez, had doubled Madrid's lead before Sevilla - who themselves lost goalkeeper Beto to injury - replied late on through Iago Aspas.

Meanwhile, Rodriguez's Real team-mate Cristiano Ronaldo is 30 today and has received the birthday bonus of being voted the greatest player to have graced the Premier League.

The former Manchester United star spent just six years in English football but as in a survey conducted by Usurv for Press Association Sport he was the people's choice, finishing ahead of Thierry Henry and Ryan Giggs on the fantasy podium.

Ronaldo was brought to Old Trafford by Alex Ferguson as a raw 18-year-old in 2003, and departed for Real Madrid in 2009 with three Premier League titles, a Champions League winners' medal and an FA Cup, and as the reigning FIFA world player of the year. 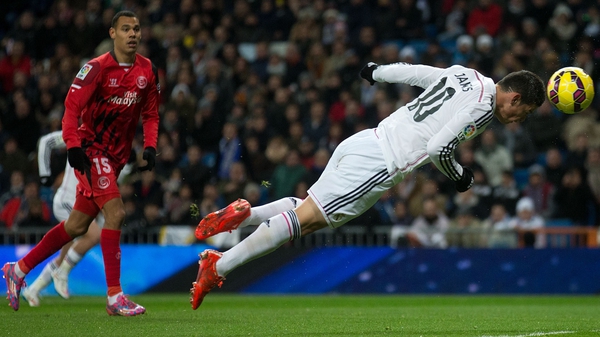