The Brazil international committed his long-term future to the club on Monday and marked the occasion with only his third goal of the season in the second additional minute to seal a 2-1 win.

Raheem Sterling had equalised in the 85th minute as Wanderers buckled under the pressure of having to play the last 25 minutes with 10 men after Neil Danns' dismissal following Eidur Gudjohnsen's disputed penalty.

It kept alive the hope of a fairytale ending to Steven Gerrard's Liverpool career before he flies off to join Los Angeles Galaxy, with the final falling on the day of his 35th birthday.

The Liverpool captain was making his 700th appearance, becoming only the third person to reach the landmark for the club after Ian Callaghan (857) and Jamie Carragher (737), in this tie but for once he was not the one to influence proceedings.

But for a long time it looked as though it would be a miserable occasion for the midfielder as Neil Lennon's team produced a similarly admirable defensive performance to the one which had earned them a goalless draw at Anfield, and for 85 minutes it looked like being the perfect gameplan.

With injury denying Emile Heskey another chance to face his former club, defender Matt Mills started the match as a makeshift striker alongside Eidur Gudjohnsen.

His lack of experience in the position was reflected by the pre-match odds, which had him at 50-1 to score with midfielder Darren Pratley, out for six weeks with a hamstring injury, rated a better bet at 20-1.

As in their first meeting, chances were at a premium for Wanderers and the best, as at Anfield, fell to Gudjohnsen who ballooned over from Josh Vela's cross, and David Wheater who headed straight at goalkeeper Simon Mignolet.

Liverpool, as you would expect, created the greater number of opportunities, with Sterling planting a shot against the post after being given far too much time to turn and pick his spot by the Bolton defence. 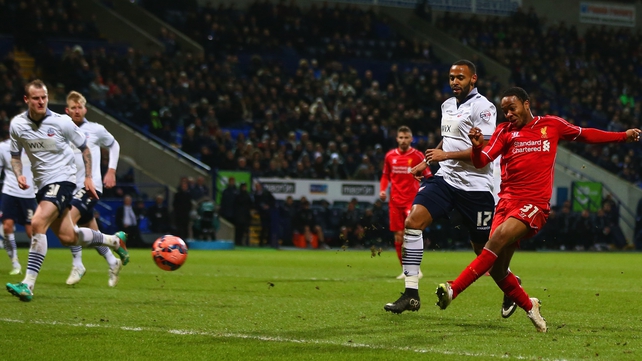 It was a rare error of judgement in the first half as they restricted the visitors to weak efforts from Gerrard, Coutinho (twice) and Sterling.

Dorian Dervite produced the tackle of the match early in the second half to dispossess Sterling just as he was about to pull the trigger having raced on to Coutinho's pass as the hosts' defending continued to keep the Premier League side at bay.

If Liverpool were frustrated by their opponents then they were infuriated by referee Roger East's decision to award a 59th-minute penalty.

Skrtel was naive in dangling a leg but the 19-year-old Clough showed the nous of an old pro in taking full advantage to go down from minimal, if any, contact.

Gudjohnsen drilled home from the spot but Bolton soon found themselves down to 10 men when Danns was sent off for a second bookable offence for a foul on Joe Allen.

Daniel Sturridge was sent on to find a goal in the final 20 minutes, just as he had on his comeback against West Ham on Saturday, but it was Jordan Henderson, another substitute, and defender Emre Can who came closest, with the former's volley deflected on to a post by Wheater and goalkeeper Andy Lonergan finger-tipping the other on to the crossbar.

Sterling was the saviour five minutes from time as he slotted Can's pass through Lonergan's legs - Liverpool's 700th FA Cup goal - before Coutinho bent one into the top corner from distance as Bolton's resistance eventually broke and the Reds booked a fifth-round tie at Crystal Palace.