Aritz Aduriz's second-half strike was enough to send Athletic Bilbao into the semi-finals of the Copa del Rey as he notched the only goal against Malaga.

After a feisty first 45 minutes the 33-year-old stabbed home from close range shortly after the break and Athletic held on to claim a 1-0 win on the night and on aggregate.

They now face Espanyol in the last four after the Periquitos held off a late fightback from Sevilla to go through.

It looked like it was going to be a formality for Espanyol after a 3-1 win in the first leg, but Sevilla set up a nervy climax after an audacious effort from Diogo Figueiras with two minutes left on the clock.

The Portuguese picked up the ball just outside the box and unleashed a superb right-footed curler that left Espanyol keeper Pau Sabata with no chance.

That narrowed the deficit to just one goal over two legs, but Espanyol kept them at arm's length to ensure their place in the penultimate round.

Prior to that it was a boring affair at the Coliseum Alfonso Perez with very little goalmouth action for either side, but Moreno burst clear and rounded Getafe keeper Jonathan Lopez to secure a 1-0 win late on.

That goal gave Villarreal a 2-0 cushion on aggregate and booked them a last-four meeting with Barcelona, who beat Atletico Madrid 3-2 on Wednesday night and 4-2 on aggregate. 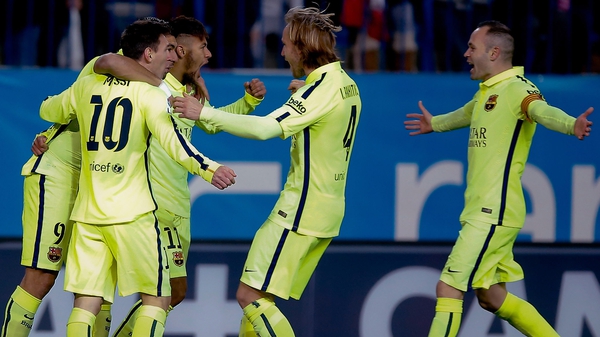