The 36-year-old, who had spells in Europe with Barcelona and Villarreal, excelling particularly with the latter, last played for Argentinos Juniors, recently helping the Buenos Aires side earn promotion to the top division.

He had been expected to join Paraguayan club Cerro Porteno but decided instead to call a halt to his playing career.

Riquelme told ESPN Sport Center in Argentina: "I've decided to stop playing football. Sunday used to be the most beautiful day of the week, I went on the pitch and did what I liked best. Now I'll be a fan."

He added: "To carry on playing there would have had to be something that interested me. I thought it was best to say that I won't play anymore."

He began and ended his career with Argentinos Juniors but spent his best years at Boca Juniors, where as a goalscoring and creative midfielder, who specialised in set-pieces, he was widely admired.

Pictured below: Supporters of Boca Juniors gather outside La Bombonera stadium in 2012 to persuade idol midfielder Juan Roman Riquelme to change his mind and stay in the club 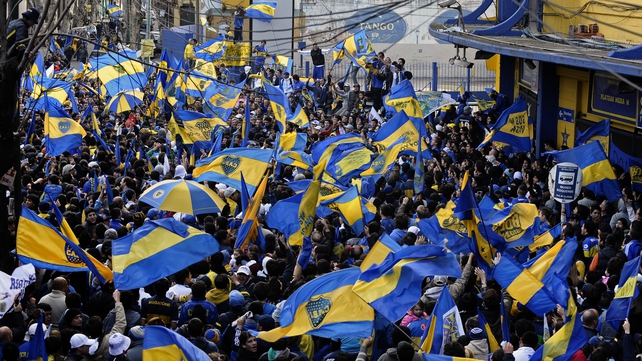 Barcelona were persuaded to sign him in 2002, but he struggled to find his best form for the Nou Camp side and moved on to Spanish rivals Villarreal, where he spent two years on loan before permanent terms were agreed between the clubs.

Riquelme moved back to Boca Juniors in 2007, initially on loan, and stayed for seven years, before the final chapter of his career was played out in the second tier.