Kris Commons helped Celtic cement their place at the top of the Scottish Premiership with a narrow 1-0 win over bottom side Ross County in Dingwall.

The visitors got the breakthrough in the 52nd minute through a deflected long-distance drive by the Hoops midfielder, who has hit an impasse in new contract talks with the Parkhead club.

The narrow but deserved victory puts the Hoops three points ahead of Aberdeen who slipped up again with a 1-1 draw against St Johnstone in Perth on Friday night.

Ronny Deila's side also have a game in hand over the Dons and will look to increase that gap although league aspirations will now be put on hold.

Scottish football will come to a halt next Sunday when the Hoops take on traditional rivals Rangers in their League Cup semi-final at Hampden Park.

It will be the first time in just under three years the two clubs have met after the Light Blues re-emerged in the bottom tier of Scottish football following their highly-publicised descent into administration and liquidation.

The Celtic players knew the game against the Staggies was their last chance to clinch a starting place at the national stadium. 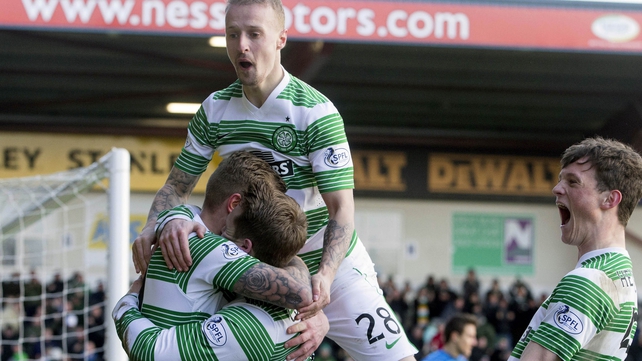 Without midfielder Beram Kayal, whose move to Brighton was confirmed yesterday, Deila brought in striker John Guidetti and midfielder Liam Henderson with Stefan Johansen, who went off with a head knock against Motherwell in midweek, and Anthony Stokes out altogether.

Staggies boss Jim McIntyre made five changes to his side with Filip Kiss, Scott Boyd, Steven Ross, Tony Dingwall and Marcus Fraser, the latter making his debut after signing following his release by the Parkhead club.

Out went injured Richard Brittain, Jackson Irvine was ineligible against his parent club while Steven Saunders, Lewis Toshney and Joe Cardle started on the bench.

While the Hoops took time to adapt to Guidetti and Leigh Griffiths playing together in a two-man attack, a 30-yard snap-shot by County striker Craig Curran in the third minute sped past Craig Gordon's right-hand post, to the relief of the Hoops keeper.

That near miss jolted the visitors into action.

Commons, twice, and left-back Emilio Izaguirre, both had efforts on goal, none of which, however, called County keeper Antonio Reguero into action.

An Izaguirre challenge on Curran inside the box as Celtic defended a corner brought claims of a penalty from home fans which were ignored by referee Kevin Clancy.

The champions could not find any rhythm as the Highlanders grew in confidence.

But on the half-hour mark, after Kiss fouled Commons 20 yard out trying to recover an earlier mistake by left-back Graham Carey, Guidetti curled the free-kick inches past the far post.

At the other end, Gordon parried a decent long-distance shot from Carey with County grateful moments later when Boyd brilliantly blocked a goal-bound strike from Commons.

Within two minutes of the restart, Griffiths looked certain to score when he found himself with only Reguero to beat but the County keeper saved and when Guidetti followed up on the rebound, Dingwall defender Jamie Reckord blocked his shot for a corner which came to nothing.

However, a Hoops' goal was only delayed until the 52nd minute, albeit it was tough luck on the home side when Commons' drive took a deflection off Staggies skipper Paul Quinn and looped over the helpless Reguero, immediately sapping the belief from County.

County substitute Liam Boyce, on just before the break for Dingwall, flashed a shot across the Celtic goal to remind the champions the job was not yet done, as did a drive by Boyd minutes later which was saved by Gordon.

As the game ended in howling wind and rain the home side went for broke with Gordon again thwarting Boyd, this time from a header. 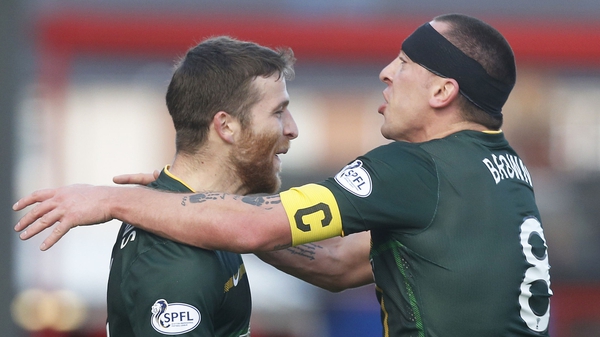 Celtic close in on leaders with win over Hamilton