Arsenal duo Mikel Arteta and Mathieu Debuchy will both be out for around three months after undergoing ankle and shoulder surgery, respectively, the club has announced.

Arteta has not played for the Gunners since 26 November, when he suffered a problem with his calf during a 2-0 win over Borussia Dortmund in the Champions League.

The 32-year-old was expected to be out for around a month, but a subsequent problem with his ankle means rehabilitation will take "approximately three months".

"Mikel has had surgery which went well. I have just seen him, he is back with us at the training ground," Arsenal manager Arsene Wenger told the official club website.

"He had a limited mobility in his ankle and some persistent inflammation that had an impact on his calf.

"That meant we had to make the decision to have surgery and it's a proper solution which gives him the best chance to recover."

Of Debuchy, who injured his shoulder in Arsenal's 3-0 win over Stoke on Sunday, Wenger said: "Mathieu had a surgery on his right shoulder following the injury on Sunday. 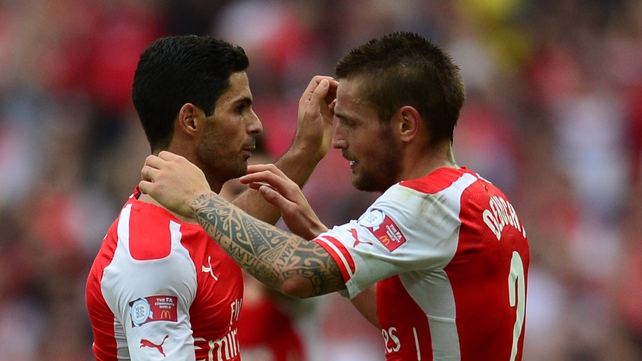 "It's very unfortunate for Mathieu, it's unbelievable because he's had two surgeries in the same season. He just came back, he played seven games and he's out again.

"I count three months out for Mathieu because contact will be a problem for the shoulder."

Arteta was a regular starter in Wenger's side last season but has only completed three league matches in the current campaign.

Danny Welbeck has also missed the last three matches with a thigh problem but the striker could return for Sunday's trip to Manchester City in the Barclays Premier League.

Wenger will be hoping for an improvement on last season's result, when they were hammered 6-3 at the Etihad Stadium, as the Gunners look to close the gap on fourth place.