Frank Lampard has insisted he remains fully committed to New York City and said he only ever joined Manchester City as a way of staying fit ahead of the Major League Soccer season.

Manchester City have faced a storm of criticism for their handling of Lampard's situation since it was confirmed on New Year's Eve that the 36-year-old will remain with the Premier League champions until the end of the season, delaying his debut for sister club New York until midway through their inaugural MLS campaign.

There has been much confusion over Lampard's contractual situation, with differing accounts as to when he signed for which club and for how long.

Although City have been cleared of breaking any rules in the deal, their attempts to clarify the situation on Friday brought fresh confusion as they initially said Lampard's deal with the club ran until December 31 - which would be in contravention of Premier League rules. That came only 24 hours after the club had been cleared by the league of breaking regulations.

The PR damage has been extensive on both sides of the Atlantic, most keenly felt in New York where their new MLS franchise must mend fences with supporters before a ball has been kicked in competitive action.

The scale of the problem in the United States was clear when the New York Post described Lampard's signing as a "fraud" in a headline.

But Lampard, in a lengthy interview with the Times, insisted his commitment to New York came first.

Describing the talks he had with Ferran Soriano, chief executive of both City and New York, after leaving Chelsea, Lampard said: "It was 100 per cent New York. I had sat down with Ferran and it was all about New York. There was no mention of Man City.

"If they had wanted to speak to me on behalf of Man City, with New York in the pipeline beyond that, they could have done that, because I was a free agent, but that was never the question at all."

Lampard said City did not enter the equation until he began to consider ways to keep fit during the long wait for New York's season to start, and insisted there was no question over his commitment to New York going forward.

"I have signed for New York," he said. "The original intention was for that to start on January 1. I signed a Man City agreement in the interim (in August). Now that has obviously changed. I have extended my period here and will join New York later."

When New York City originally announced the deal on their website in July, they said Lampard's contract began on 1 August, and City initially described his arrival in Manchester as a loan.

Both those announcements were described as "mistakes" by the City Football Group - parent company to both clubs - on Friday, but their 'clarification' also suggested Lampard had only agreed a short-term deal with Manchester City until 31 December. That would be in contravention of Premier League rules which state all contracts must run to the end of the season unless exceptional circumstances apply.

"The fact is I signed for New York, then I signed for Man City in the interim and now it has been extended" - Frank Lampard

On Thursday, the Premier League had said it was satisfied no rules had been broken because Lampard's deal was until the end of the season.

It was only the latest in a series of developments in the saga which have sown mistrust in the deal.

"That is what has frustrated me, that people were sort of saying 'You knew what you were doing'," Lampard added. "I never would have done that. If I had wanted to come to Man City, then I would stand up and come to Man City. That wouldn't have been a problem.

"And in terms of Man City being 'sneaky', they could have signed me on a free anyway if that's what they wanted to do. People mention Financial Fair Play but what difference would that have made? No difference. It would have been a slippery move, a dodgy move, for nothing. The fact is I signed for New York, then I signed for Man City in the interim and now it has been extended."

City manager Manuel Pellegrini sought to draw a line under the affair on Friday, saying: "I think it's an issue which is finished.

"Frank now is here. I know that there a lot of different opinions about Frank, about that. I respect all of them, but the decision is taken already and Frank will stay here until the end of the season." 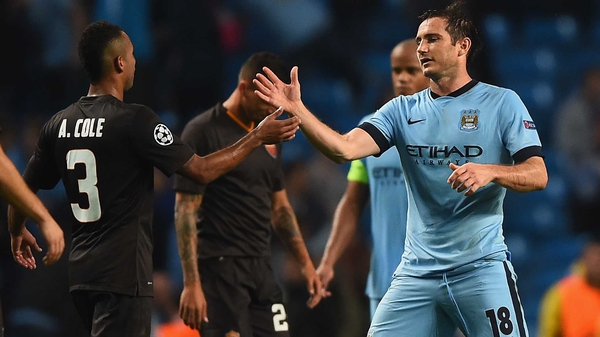