Just days after announcing he will leave at the end of the season, captain Steven Gerrard scored twice to ensure Liverpool avoided a FA Cup upset with a 2-1 win at League Two AFC Wimbledon.

Gerrard gave Liverpool the lead with a close-range header after just 12 minutes but Adebayo Akinfenwa equalised after Liverpool failed to clear a corner in the 36th minute.

The 34-year-old, who has said he will move to Major League Soccer in the US in the summer, scored the winner from a free-kick on the edge of the box just after the hour mark.

Liverpool will host Bolton in the fourth round after the draw was made earlier tonight.

Winning a third FA Cup on what will be his 35th birthday would certainly be a fitting end to Gerrard's time with the Reds.

Wimbledon fans, however, were dreaming of an upset similar to their former club's famous defeat of the Merseyside behemoths in 1988, when Lawrie Sanchez's header brought home the cup.

That remains the most famous day in Wimbledon's history and this match marked another milestone, with this the first time they had reached the third round since their 'rebirth' in 2002, shortly before the old club moved to Milton Keynes and became the MK Dons.

However, it was a tie which looked to only be going one way as Gerrard put the visitors ahead with a lovely header after 12 minutes.

After neat team play, Gerrard played the ball out to the right flank and Manquillo's cross was headed home by the Reds captain.

While Liverpool were dominating possession however, the Dons were growing into the tie.

Rather than take the sting out of the tie, though, it sprung the hosts into life, with Wimbledon netting a deserved leveller through Akinfenwa.

The presence of the 16-stone striker, affectionately nicknamed 'The Beast' and widely considered the strongest player in world football, saw much-maligned Mignolet flap at a corner and, when the ball came back off the bar, he prodded home from close range.

It was a deserved equaliser and things almost got even better early in the second half, with a poor Gerrard pass allowing Sammy Moore a strike which deflected just wide.

That was a let-off for the Liverpool captain, who made amends from the resulting corner as he cleared Barrett's header off the line, with Rigg firing wide as the visitors continued to wobble.

It was at this point, though, that the tide began to turn. Jordan Henderson saw a shot accidentally blocked by his own team-mate and Philippe Coutinho fired wide, before penalty appeals for handball against Barry Fuller were waved away.

However, the Wimbledon vice-captain could have no arguments with the free-kick award minutes later.

Fuller was booked for his challenge on Coutinho and Gerrard made the home side pay.

Like so many times before, he dragged Liverpool up by the coat-tails and brilliantly curled home a 22-yard free-kick which proved the decisive goal in an enthralling third-round tie. 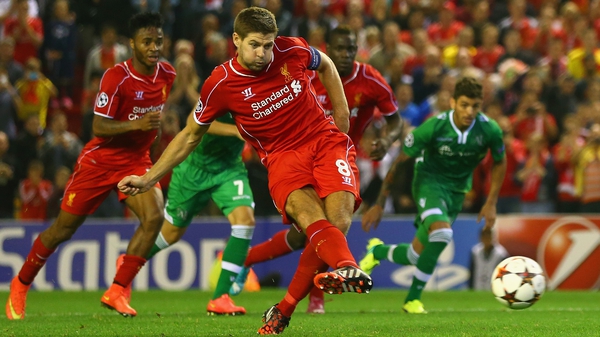