Shelvey elbowed Liverpool defender Emre Can during Swansea's 4-1 defeat on Monday night but escaped any action from referee Andre Marriner.

The 22-year-old's suspension begins with immediate effect and he will serve a four-game ban, an extra game added to the customary three for violent conduct as he was sent off at Everton earlier in the season.

Shelvey will now miss Swansea's Premier League visit to QPR on New Year's Day and Saturday's FA Cup third-round tie at Tranmere, as well as league home games against West Ham and Chelsea on 10 and 17 January.

The once-capped England midfielder has been shown seven yellow cards and one red card this season and Swansea manager Garry Monk said before the Liverpool game he needed to "wise up" because "laziness" was costing him needless bookings.

"I have spoken to him a number of times," Monk said after Shelvey was booked in the St Stephen's Day victory over Aston Villa.

"We can't afford silly bookings and Jonjo has to wise up because that yellow card came from laziness and he has to be better than that."

But Monk said he had no intention to sell Shelvey - who joined Swansea from Liverpool for £5million in the summer of 2013 - in the January transfer window.

"It is often the case (to sell) when a manager talks about a player," said Monk.

"But that is absolutely not the case. It was not my intention to give the impression I do not want Jonjo here.

"When I talked about him I was talking about the specific instances where he can do better, in relation to the yellow cards he has picked up.

"He is going to get a lot better and I want that to happen here at Swansea, not anywhere else."

It was seen by the match officials at the time so is considered 'dealt with' and could not be considered for retrospective action by the FA. 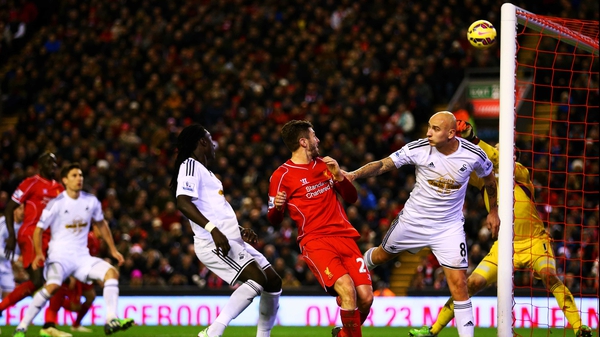