Adam Lallana scored twice, including a freak block-down of a Lukasz Fabianski clearance, to inspire Liverpool to a comprehensive dismissal of Swansea at Anfield.

After just nine goals in as many home Premier League matches this season the Reds scored four - the first time they had done so since March 30 - in the space of 36 minutes either side of half-time.

Recalled defender Alberto Moreno opened the scoring before Lallana got his two, one with a little help from Fabianski, early in the second half.

The last side to concede two in the same match to the England international were Barnsley in the Championship in March 2012 but his second strike was pivotal as Gylfi Sigurdsson's goal had threatened to make a game of it.

An own goal from former Liverpool midfielder Jonjo Shelvey, who escaped punishment after appearing to throw an elbow into Emre Can's face, put the gloss on the victory.

On several occasions this season there has been talk of corners being turned but you wonder whether this may well be a significant win for Liverpool as they head into a new year by moving up to eighth place in the table, five points behind fourth-placed Southampton.

Manager Brendan Rodgers' slight tweak to his system saw two full-backs replace midfielders in the wide positions, with Can showing enough in 45 minutes at Burnley on Boxing Day to convince his manager to start him as the third centre-back.

Moreno adapted better to the role on the left than Javier Manquillo did on the right but while he got forward plenty, his tendency to drill crosses into the penalty area meant his team-mates had to be perfectly positioned to take advantage.

Raheem Sterling almost did when he directed a first-time effort straight at Fabianski but Lallana blazed the rebound over.

Moreno's energy created the opening goal - becoming Liverpool's 10th different scorer in the league at Anfield this season - as having started the move on the left he charged into the box to turn a cross from Jordan Henderson, fed by Lallana, into the goal despite Fabianski getting a hand to it.

Swansea could have been reduced to 10 men six minutes before the interval, when Shelvey seemed to elbow Can in the area, but despite referee Andre Marriner seemingly having a decent view of the incident, the midfielder went unpunished.

By comparison to Fabianksi, Liverpool's goalkeeper Simon Mignolet, starting for the first time in five matches after a Boxing Day injury to Brad Jones, was relatively untroubled.

The Belgium international's reprieve came quicker than expected but he was given an easy ride in the first half with his only save a comfortable one from Nathan Dyer, although the cheer from the home crowd appeared to be more relief than overwhelming support.

After his erratic substitute performance at Turf Moor, Mignolet would have been favourite to make a mistake but it was his opposite number who gifted Liverpool their second when his clearance cannoned into Lallana and back into the empty goal.

But Rodgers' side have been masters of their own downfall many times already this season and within a minute Swansea were level when weak headers by Manquillo and Mamadou Sakho allowed Sigurdsson to pull one back.

Sakho almost compounded that error by giving the ball away to Wilfried Bony straight from the kick-off but Mignolet came to his rescue with a low save.

A manic three-minute period ended with Sterling, who became more of a threat as the match wore on, hitting the post at the other end from an immediate counter-attack.

Despite that the momentum briefly seemed to be with the visitors but when Philippe Coutinho's sublime backheel allowed Lallana to dance his way through the defence and fire past Fabianski, Anfield could relax.

Shelvey's header past his own goalkeeper from Henderson's corner had an element of karma about it after his earlier indiscretion.

Sterling's flap at the head of Federico Fernandez down in front of the Kop was not as potentially serious as Shelvey's elbow but could equally have been punished with a red card, although his withdrawal soon after was more to protect his legs more than anything else.

Swans substitute Bafetimbi Gomis hit the angle of post and crossbar late on but it was a deserved win for the hosts. 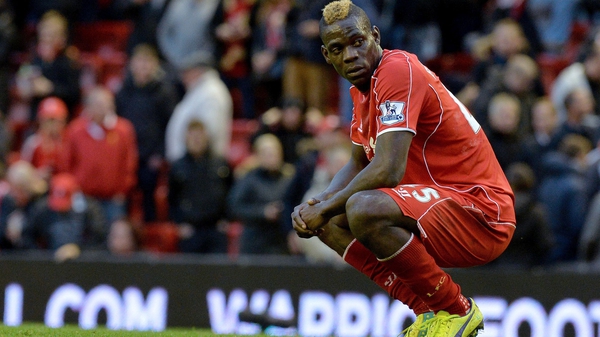