Alan Irvine's days as West Brom head coach could be numbered after Mame Biram Diouf's second-half brace condemned the Baggies to a 2-0 defeat at Stoke.

Diouf slotted home in the 51st minute before a lucky deflection off the Senegal forward from Marko Arnautovic's shot 15 minutes later took the ball past Ben Foster once again.

West Brom had put in a creditable away performance up to that point without being able to convert it into goals, and came agonisingly close to scoring between Diouf's two efforts as Gareth McAuley hit the post.

But the simple fact was that the Baggies had suffered a seventh loss in nine Barclays Premier League matches, and Irvine's fears about his job will only have deepened.

Albion are now 16th, just a point clear of the Barclays Premier League relegation zone, and at the end of a fairly wretched 2014 the club may well be ready for a change at the helm once again.

Things look far rosier for Stoke, who are up to 10th having registered back-to-back league wins for the first time this season.

Albion's record signing Brown Ideye was preferred to Saido Berahino in the starting line-up and was presented with an opportunity in the opening few seconds as he latched onto a ball over the top, but the Nigeria international sent his effort off-target.

Glenn Whelan felt he could have had a penalty after he was challenged by Craig Gardner, and he then brought a save out of Foster with a header that appeared to be going wide anyway.

Foster's opposite number Asmir Begovic comfortably dealt with a Stephane Sessegnon attempt before the ball ricocheted to Bojan Krkic on the edge of the Albion box and the Spaniard lashed a shot just wide.

A West Brom break saw another chance come Ideye's way in the 18th minute but Begovic denied him with his legs and both sides continued to show a lack of cutting edge.

James Morrison's shot was caught by Begovic, Ideye tumbled in the area but play continued and Whelan saw a volley go behind off the head of Joleon Lescott.

Baggies skipper Chris Brunt unleashed a swerving strike in the 36th minute that went close but wide, before Sessegnon tried his luck with less accuracy.

Whelan got a long-range effort on target towards the end of the half that Foster claimed and Stoke were then relieved after losing possession in their own half to see Gardner loop a shot wide.

It did not take long for the standard of finishing to improve after the interval as Diouf notched his fifth goal of the season.

Bojan lofted the ball out wide, Erik Pieters delivered it into the box and Diouf got away from two defenders before slotting in a shot that took a slight deflection off Lescott.

The Potters saw two decent chances to extend their advantage go begging in quick succession soon after, both coming from Diouf crosses.

The first came to Peter Crouch, who was just unable to finish at the near post as a challenge diverted the ball wide, and it was subsequently Arnautovic unable to capitalise, nodding the delivery wide.

Things were looking ominous for West Brom, but - with Berahino having been sent on for Sessegnon - they then almost snatched an equaliser as Begovic parried a Gardner shot and McAuley prodded against the post.

Moments later, Stoke had their second goal in somewhat fortunate circumstances, Bojan passing to Arnautovic and his strike taking a deflection off Diouf that deceived Foster.

There looked little prospect of West Brom getting back into the match after that and they mustered virtually nothing in terms of posing an attacking threat in the remaining minutes.

There were boos from their fans at the final whistle and what appeared to be a barrage of abuse from the away section directed at Irvine as he walked past it and down the tunnel. 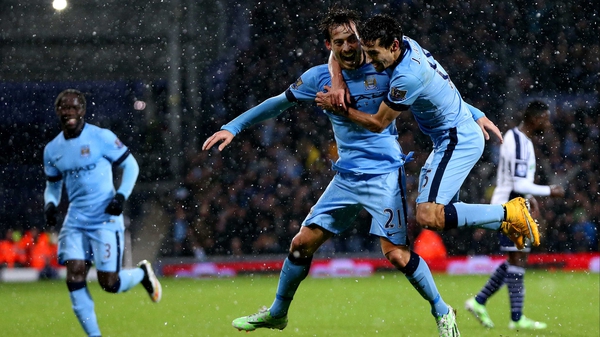