Leicester clung on by their fingertips to a first victory in 14 Premier League matches at Hull, easing some of the pressure on manager Nigel Pearson and ensuring the Tigers remain mired in the relegation battle.

Both sides finished with 10 men after late red cards for Paul Konchesky and Republic of Ireland international Stephen Quinn, but it was the 32nd minute strike by Riyad Mahrez that settled matters in the visitors favour.

The Foxes were at times passengers in a low-quality contest but given their current plight this 1-0 win will taste every bit as good as their previous success - a headline-grabbing 5-3 over Manchester United in September.

Hull boss Steve Bruce had claimed the match was as big as last season's FA Cup final for his club, given the opportunity it offered to lift them nine points above their rock-bottom visitors, but the result was just as crushing as the one suffered against Arsenal at Wembley.

The Tigers were far from fluent but will be bemused at their inability to find the net, hitting the post twice, seeing two strong penalty appeals for handball turned down and failing to take a series of presentable chances.

Their St Stephen's Day win at Sunderland now seems much more distant than 48 hours ago, as they contemplate a home record that now reads one win in nine this term.

The Tigers started nervily but regained a measure of composure as they settled in to their task.

Leicester took the lead with their first serious attempt. David Nugent drove forward but when the ball broke to Mahrez there was still plenty to do.

The Algerian quickly sized up his position, cut inside to fashion an angle and whipped a low shot through the box and inside Allan McGregor's far post.

A heavy first touch from Ramirez stopped him rounding goalkeeper Ben Hamer in pursuit of a quick equaliser but the sides should have gone in level.

In added time Quinn produced a wonderful hanging cross from the left flank, landing perfectly for Ahmed Elmohamady's arrival at the far post.

From close-range and with the full target to aim at, everything was in the Egyptian's favour until he got underneath the ball, volleying high and wide.

At half-time, Steve Bruce sent on top-scorer Nikica Jelavic for Ramirez - but within minutes there was a partial floodlight failure, though nothing serious enough to delay proceedings.

Although the light was fading, the crowd attempted to provide some vocal support and were actively willing the ball into the net when Elmohamady's right-wing cross took a wicked deflection off Wes Morgan. Despite their best efforts it crashed in to the side netting.

The double switch also led to a defensive reshuffle that restored Livermore to midfield as Brady dropped to full-back.

Briefly it worked. Livermore brought some bite to the middle, Ince produced a fleet-footed dribble from left to right and Hernandez began to put himself around in the penalty box.

Livermore rattled the post in the 77th minute with a fine effort off the outside of his boot, then tried his luck again with the rebound, only for the diving Morgan to smother the shot amid cries for handball.

Five minutes later the woodwork was clattered when Hernandez won a Brady corner and stooped to send a low header against the same post.

This time the ricochet fell for Davies, whose powerful strike was blocked on the line by Marcin Wasilewski, again an arm seemingly involved.

Both sides lost men in the frantic closing moments, Konchesky for a second yellow and Quinn for a deliberate handball to deny Nugent. 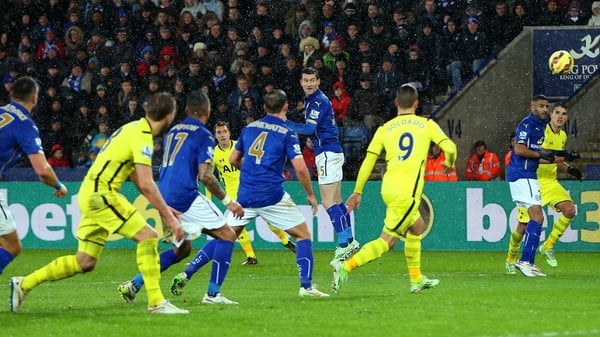 Spurs win away at struggling Leicester