Chelsea will spend Christmas three points clear at the top of the Premier League after they regained the cushion with a 2-0 win at Stoke.

Cesc Fabregas proved a key influence once again for the Blues, providing the corner from which John Terry converted a second-minute header and then notching a goal himself in the 78th minute, teed up by another impressive performer in Eden Hazard.

Jose Mourinho's side could have had more goals, with Diego Costa failing to finish a couple of good opportunities, and were generally very much in control throughout this contest, showing their ability to cope with an at-times combative Stoke outfit on a chilly Monday night at the Britannia Stadium.

The Blues had also suffered a loss - their first of 2014/15 - in their previous away league match, a 2-1 reverse at Newcastle.

But they had no such problems on this occasion, securing the victory they needed to put breathing space once more between them and second-placed Manchester City.

They raced into the early lead when Fabregas - registering yet another assist for the campaign - swung in a corner and Terry got the better of Geoff Cameron to head in his first Premier League goal since December 2013.

Stoke made a firm response, although initially in a physical sense as Costa was sandwiched by Steven Nzonzi and Ryan Shawcross - a collision that left the Blues striker requiring treatment.

Then, while tensions appeared to be simmering between Costa and Shawcross, Phil Bardsley made a reckless-looking tackle on Hazard.

Mourinho's reaction, as he bolted out of his technical area, suggested he felt Bardsley should have been sent off, but referee Neil Swarbrick only produced a yellow card.

The Potters subsequently began to apply some pressure on the Chelsea goal, with the fit-again Thibaut Courtois doing well to tip a deflected Nzonzi shot around the post and Jonathan Walters seeing an effort blocked by Gary Cahill.

But Chelsea then sprung a counter-attack which broke down when the ball came off Swarbrick, prompting further ire from Mourinho.

And the visitors might have added a second goal just after the half-hour mark as Nemanja Matic made a fine tackle to rob Cameron of possession, the Blues broke away and the ball was fed to Costa, who was through one on one with Asmir Begovic but sent his shot narrowly wide.

Mourinho's men finished the first half looking comfortable, and that continued after the break, although they were unable to make the net bulge again.

Fabregas had penalty claims dismissed after going down in the box and Willian sent the ball into Begovic's hands. Erik Pieters was booked following a minor flare-up with Costa, Hazard set up Fabregas, whose flick was caught by Begovic, and Willian saw a free-kick deflect wide.

In the 63rd minute Stoke striker Peter Crouch was forced off with an injury, with Mame Biram Diouf coming on, before Cameron was replaced by Charlie Adam, and the latter went close to equalising with a drilled shot wide.

But it was not long after that that Chelsea looked to have made the game safe as the ball came to Fabregas in the box from Hazard and the Spaniard took one touch before seemingly scuffing a shot that deceived Begovic to roll in.

Begovic came out moments later to deny Costa from making it 3-0, before another Stoke substitute Oussama Assaidi - scorer of the winner in this fixture last season - had a shot saved by Courtois.

Further efforts from Adam and Bojan Krkic were also unsuccessful, while Walters picked up a booking for a foul on Hazard, who had to come off. 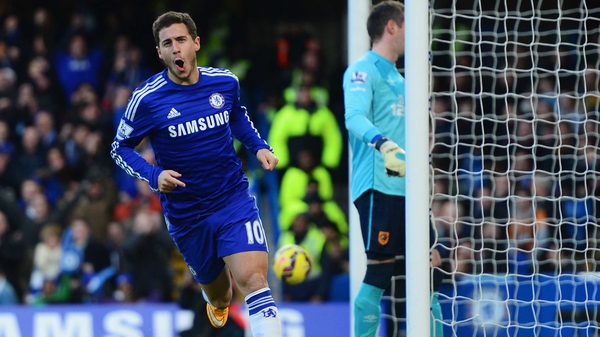