Manchester United boss Louis van Gaal claims he is "disgusted" at reports that he will spend heavily on new players.

Van Gaal also responded angrily to reports that he will be handed between £100million and £200million to make new signings. The Dutchman said that was disrespectful to his current playing staff.

"It is disrespectful to my players and I don't like to talk about it. I have to work with the selection I have and I have respect for my selection and I believe in my players."

Van Gaal will cross swords with compatriot and his former assistant Ronald Koeman on Monday - but both managers have declared their personal relationship to be "private".

Koeman, now Southampton manager, worked under Van Gaal at Barcelona but fell out when they were at Ajax in 2004, when Koeman was coach and Van Gaal the technical director.

They shake hands on meeting now, according to Koeman, but Van Gaal referred to his former protege as "weak" in his autobiography and the closeness they once had never returned.
Van Gaal described Koeman as "a very good coach" but refused to talk about their relationship since the fall-out.

The United manager told a news conference at the club's Carrington training centre: "I don't have to describe my relationship with the trainer of the opponent... that's more private.

United can go third if they beat Saints, who are a point ahead of them in the table. They then face Liverpool, but Van Gaal disputed suggestions the match against their Merseyside rivals was more important. He also believes the south-coast club can still be in the Champions League places at the end of the season.

He said: "Southampton play better at this time and have more points at this moment than Liverpool, so I think it's good that we have to play Southampton now.

"I think they have a good squad, a lot of players that I know and who were offered to us. I think they are able to come in the top four but that's also because I believe in the management in Ronald Koeman and his brother [Erwin]."

Wayne Rooney will be fit to face Southampton - the United skipper had a scan on Thursday to examine a possible knee problem but has been given the all-clear.

However, record signing Angel di Maria will not be ready to return from his injury in time for the trip to St Mary's. 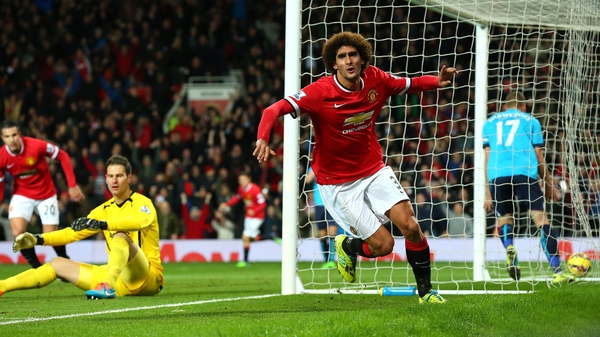 Nervy Manchester United hold on to see off Stoke