Yaya Toure and Frank Lampard's strikes took Manchester City up to second in the Barclays Premier League table and handed Southampton an ominous start to a daunting run of festive fixtures coming up.

Toure and Lampard provided the crucial calm finishes before Gael Clichy blasted home his first City goal in a 3-0 win at St Mary's which lifted the defending champions above Saints in the league standings.

The assured visitors even shrugged off referee Mike Jones denying Sergio Aguero a clear penalty in the first half, and also Jones' decision to show a red card to defender Eliaquim Mangala.

City made light of that awful decision and Mangala's dismissal for a second booking to inflict Saints' first home defeat of the league campaign.

Southampton face a season-defining December, up against Arsenal, Manchester United and Chelsea amid seven games in 25 days.

Hacked down by Fonte in the game's first significant act, Aguero scrambled to his knees expecting a penalty and the chance to add to his midweek Champions League hat-trick against Bayern Munich.

Referee Jones had other ideas however, booking the Argentina striker for diving.

The wretched decision shocked City to the point of whipping out the rug on their early momentum.

Victor Wanyama's harsh booking for hauling down Toure in full flight may just have played on official Jones' mind when he made the call on Fonte's challenge on Aguero.

Fonte was fortunate in the extreme to avoid any kind of censure, and on another day may well have been sent off.

Toure teed himself up for a trademark pitching-wedge chip as City continued to press, only to loft the ball too feebly and straight at Saints goalkeeper Fraser Forster.

Suitably aware just how far their luck had been stretched in a nervy first 15 minutes, Saints suddenly settled.

Wanyama fired a raking crossfield ball to Ryan Bertrand, and in a flash the game changed.

Joe Hart parried desperately into the box, but despite the danger City still managed to clear.

Referee Jones' muddled afternoon continued unabated when Mangala's harem-scarem rampage was halted with play brought back instead for a free-kick, with Saints ruled offside.

England man Nathaniel Clyne's bad defensive read then gifted City the chance of the half.

The Saints full-back raced out of the line only to realise far too late that Jesus Navas was hot favourite for the loose ball.

The Spaniard hustled onwards and sent Stevan Jovetic racing in on goal. The Montenegro striker then had the half's sole gilt-edged chance, but could only fire straight at Forster.

In the ensuing scramble Saints cleared the ball off the line, further frustrating City's efforts.

Saints opened the second half with two long-range efforts, but neither could test Hart.

The astute Brazil midfielder continued to hustle, dispossessed Wanyama on the edge of Saints' area - and teed up Toure.
The towering Ivorian picked his spot and slotted the ball past the helpless Forster, via a small deflection.

City emptied their bench in a bid to cement control, and Navas should have doubled the lead when dragging a shot wide of the target.

Mangala was then dismissed for a second yellow card, after taking out Shane Long when the Saints striker was about to edge through on goal. 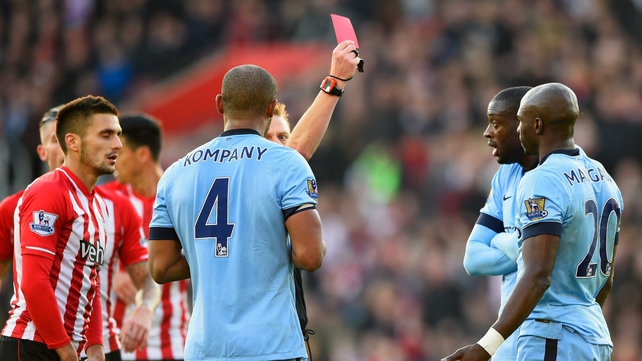 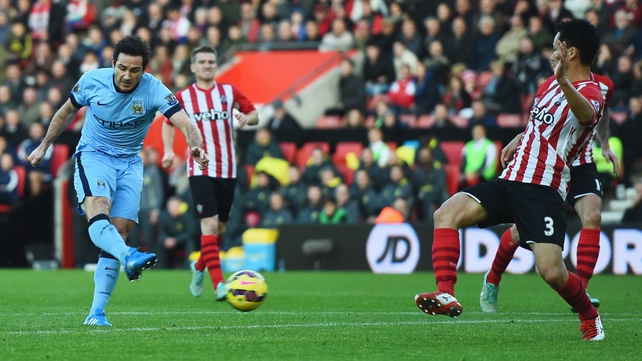 Refusing to allow the game to meander to a close, Clichy capped another fine City raid, blasting high into Forster's net to rub salt into Saints' open wounds.