Australia captain Jedinak paid his own tribute to his countryman Phillip Hughes, the Test cricketer who died on Thursday after being hit by a ball while batting, before kick-off when a bat had been laid on the field in honour of the 25-year-old.

Jedinak picked up the bat as a mark of respect to Hughes and was then a considerable presence in the Palace midfield as high-flying Swansea were stifled at the Liberty Stadium.

Swansea started the day in seventh place with manager Garry Monk saying the next nine games would define their season - whether they could make a challenge for a European place or be looking over their shoulder at the teams below them.

They started well with Wilfried Bony's sixth goal of the season giving them a 15th minute lead but Palace displayed the character and resolve which earned them a 3-1 victory over Liverpool in their previous fixture.

Palace equalised after 25 minutes when Marouane Chamakh fell under minimal contact from Jonjo Shelvey and Jedinak scored for the second consecutive game to earn the visitors a point. 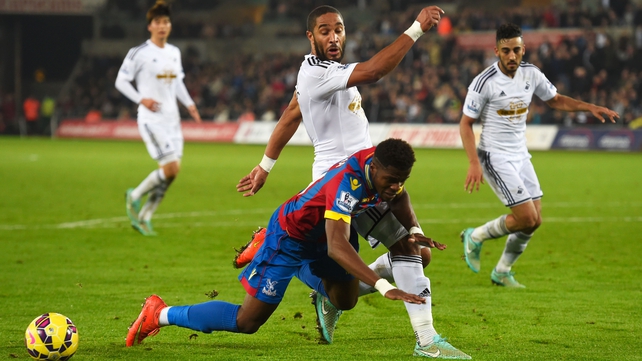 Eagles manager Neil Warnock said before the game that Monk had taken Swansea to a new level and that compliment seemed justified as Palace were overrun in the opening 20 minutes.

Sigurdsson, so often the provider for Swansea this season, found Bony on the edge of the penalty area and his smart turn and shot gave Julian Speroni no chance in the Palace goal. It was the Ivorian's 18th Premier League goal of the calendar year - the best in the division.

It seemed a matter of time before Swansea would build on their lead but game turned when Shelvey - recalled in place of loan signing Tom Carroll - got on the wrong side of Chamakh in a congested penalty area and the Palace forward fell to the floor.

Jedinak stepped up to hammer the ball past Lukasz Fabianski for his fifth goal in eight games, a remarkable statistic considering his first five goals for Palace came in 123 appearances.

Suddenly Palace were a different proposition with Yannick Bolasie finally getting into the game down the right flank and Chamakh proving a nuisance down the middle.

Chamakh had a clear opportunity to put Palace ahead when Ashley Williams miscued Martin Kelly's cross - but Fabianski was off his line smartly to smother the shot. 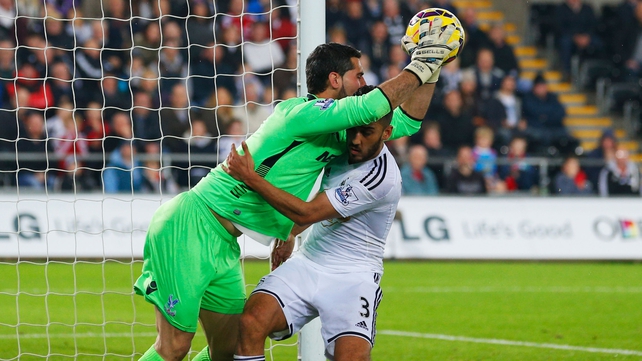 Bolasie then clipped the Swansea crossbar from 20 yards with referee Martin Atkinson adjudicating that Fabianski had got a touch on it - but Palace were sent a warning that the threat from the home side was not over.

Slick passing play between Bony and Sigurdsson opened up the space for Wayne Routledge to run through unattended but his left-foot shot lacked power and Speroni saved comfortably.

Chamakh went into referee Atkinson's book for scything down Neil Taylor and he was perhaps fortunate to stay on the field as he had escaped a blatant show of dissent in the opening stages when throwing the ball down in disgust at the award of a Swansea free-kick.

The Moroccan still emerged for the second half despite the fact he was walking a very fine line and Palace were encouraged by Jedinak firing at Fabianski and Bolasie having his shot deflected wide.

Swansea winger Montero and Routledge were not the force they had been in the opening stages but the latter carved out a chance for Shelvey, who controlled the ball on the chest and volleyed straight at Speroni.

Palace were defending well but Shelvey's cross produced panic in their ranks and Speroni had to react smartly to save Sigurdsson's volley.

Swansea had wrestled control back for the most part but openings were not too forthcoming, although Sigurdsson's effort 12 minutes from time was too close to the far post for Palace's comfort.

Sigurdsson was the most likely player to grab a winner but when he blazed over after taking Angel Rangel's pass Palace's point was secure. 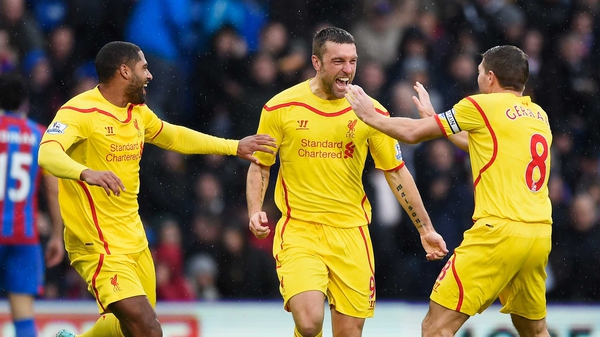 Awful Liverpool slump to another defeat