Manchester United looked more like their old selves as they cruised to a convincing 3-0 win over lacklustre Hull at Old Trafford.

Louis van Gaal's men dominated from start to finish and the result was never in doubt after Chris Smalling scrambled in the opening goal after 16 minutes.

Captain Wayne Rooney added a second before the break and Robin van Persie made a welcome return to the scoresheet as United secured a third successive Premier League win.

The only downside for United, in a season that has already been blighted by injuries, was the loss of record signing Angel di Maria early on with a hamstring problem while Rooney limped off after taking a blow in stoppage time.

But on this occasion the Argentinian's departure made little difference as United strolled through the game, while Hull struggled to gain a meaningful touch in the first half.

Van Gaal fielded a flat back four with Smalling and Marcos Rojo, the only specialist defenders in the side, filling the centre-back spots.

Smalling looked like a player transformed from the man sent off in the loss at Manchester City four weeks ago, attacking with vigour and looking composed in all areas of the field.

United were intent on attack with Juan Mata and Di Maria deployed in support of Rooney and Van Persie, who was retained despite recent poor form and the availability of Radamel Falcao after injury.

United had a half-hearted penalty appeal for handball in the second minute but it was Rooney who set the tone when he cut inside and flashed a shot wide after five minutes.

The loss of Di Maria, who had already made a couple of dangerous breaks, after 14 minutes with a hamstring injury had the potential to disrupt their rhythm.

But if anything their shape looked better after Ander Herrera came off the bench to replace him.

Smalling handed United a deserved opener, although it owed much to poor Hull defending and might not have been given before the introduction of goal-line technology.

Hull failed to deal with a Rooney corner and Van Persie nipped in to head at goal. It was a weak effort but Allan McGregor flapped unconvincingly and Smalling diverted it back towards goal.

McGregor got in the way for a second time but could not prevent it crossing the line, a fact confirmed as referee Anthony Taylor checked his watch.

Hull had a rare chance midway through the first half as Robbie Brady floated a free-kick into the box but Michael Dawson scuffed a shot into the ground.

The game began to resemble a training exercise for United at times, such was the ease with which they controlled possession.

Herrera had a shot deflected wide and Smalling almost found the target again from six yards before Van Persie shot at McGregor.

Hull were in a sorry state and Hatem Ben Arfa suffered the indignity of being hauled off 10 minutes before the interval as Steve Bruce attempted to change the direction of the game.

It proved to no avail as Herrera - although there was a suspicion of offside - headed down a Mata cross. Curtis Davies had chance to clear but hesitated and paid the price as Van Persie laid off to Rooney and the England captain hit a crisp low strike past McGregor from 20 yards.

Hull belatedly showed some urgency early in the second half as Andrew Robertson broke forward but shot tamely at David de Gea. Nikica Jelavic also had half a chance but headed over.

United continued to boss the game and Van Persie evoked memories of last summer's World Cup as he met a Michael Carrick cross with a fine header, although this time the offside flag was raised and McGregor saved.

But the Dutchman got the goal he needed 23 minutes from time as, moments after being cynically hauled down by Dawson, he turned James Chester on the edge of the box and rifled a left-footed shot into the roof of the net.

He made way for fit-again Falcao moments later but had made a point after a week of heavy criticism.

Jelavic got a header on target to give De Gea something to do but United pressed again with Mata firing over. Smalling got forward again to meet a Mata corner but Robertson had time to clear off the line.

If anything the scoreline flattered Hull, although they almost conceded a fourth in the dying moments when Dawson blocked on the line at point-blank range from Falcao. 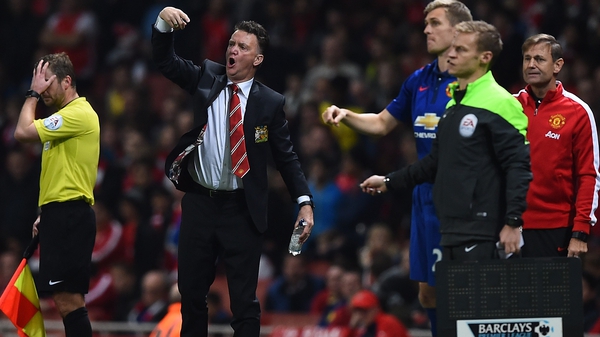