FAI president Tony Fitzgerald has tonight issued a statement on behalf of the FAI board pledging its support for chief executive John Delaney following the controversy surrounding him singing a republican song in a Dublin pub.

Fitzgerald said the FAI is "happy to bring the matter to a close" after Delaney apologised.

The president's short statement said: “Following recent coverage of the cyber bullying of his partner Emma and the fact that John has publicly apologised if he offended anyone for singing the nationalist song in question, we are happy to bring the matter to a close.

“The Board is more than pleased with the way John Delaney is running the Association. He has done an enormous amount for Irish football.

“In the past year alone the winning of EURO 2020 bid for Dublin adds to a number of very important developments he has helped oversee during his tenure. We recently awarded him a contract extension to 2020 and he is fully deserving of that.”

Earlier today, FIFA vice-president Jim Boyce said he believed Delaney's apology issued yesterday was sufficient, but that the chief executive needs to be more careful in public given his position.

Delaney was recorded singing the Wolfe Tones' song Joe McDonnell in a Dublin pub in a video posted to YouTube and subsequently apologised for any offence caused.

Boyce, who was injured in a bombing in his native Belfast in 1971, said he had zero tolerance for sectarian sentiment or "glorifying" the actions of paramilitary groups in Northern Ireland.

"I've known John a very long time. We've been away together on many occasions," Boyce told RTÉ today.

"We've shared dinners together, we've shared many a good evening together. I'm sure today he regrets very much what he did.

"I was injured in a very bad bomb explosion on my second wedding anniversary.

"I have always consistently condemned any form of bigotry or sectarianism. It [the bombing] didn't change me as a person because I have no time for it.

"No matter what side it comes from, I would say the same if this had come from the loyalist side, I have no time [for] glorifying people [republican/loyalist paramilitaries] who murdered many innocent people."

Boyce said yesterday that Delaney had been guilty of stupidity, and he stood by that description today, although he accepted that "everybody makes mistakes".

"We all make mistakes. I think John has made a big mistake in this particular instance" - Jim Boyce

"I'm sure John himself, when he's sitting and reflecting on it today... I know he's already apologised, and I'm glad to hear that he's done that.

"John is in a very responsible position. I know he's very highly thought of, he's chief executive of the Football Association of Ireland, and I think when people are in those positions they have to be careful what they do, especially in public.

"We all make mistakes. I think John has made a big mistake in this particular instance.

"He has apologised, and I think that apology should be accepted, but he has to reflect on, what I thought [was] 'stupidity' and that was the word I used. I certainly wouldn't have done it.

"Should it have come on the loyalist side of the community I would condemn that equally." 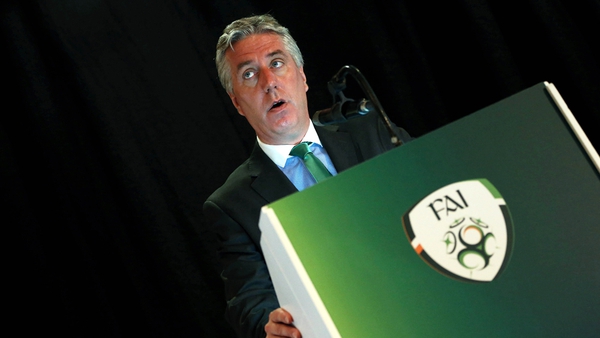