Classy Chelsea romped to a 5-0 win at Schalke 04 on Tuesday to power into the last 16 of the Champions League and make it a miserable night for their former coach Roberto Di Matteo.

Current Chelsea boss Jose Mourinho insisted in the build-up to this clash that his side needed to keep up their good form to avoid blowing their place at the head of Group G and ending up playing in the Europa League.

The Portuguese was also steadfast that he did not want to talk about Di Matteo's achievements at Stamford Bridge but did question whether the side the 44-year-old led to European Cup success was a good one.

The two exchanged a cursory handshake before kick-off that lacked the warmth of a meeting of friends but that was in stark contrast to the travelling Chelsea fans, who sang Di Matteo's name as the game got under way - and that was as good as it got for their former midfield favourite.

John Terry was suspended when Di Matteo oversaw Chelsea's memorable European Cup success in 2012 but the two celebrated together in Munich like the captain had been one of those out on the pitch.

And it was Terry who quickly took the sting out of any kind of payback mission Di Matteo was mounting having been axed by Roman Abramovich just six months after the biggest night in the club's history.

The 33-year-old rose to nod home a corner supplied by the impeccable Cesc Fabregas inside 60 seconds to silence the Veltins Arena.

Willian added a second and, when Jan Kirchhoff headed in an own goal two minutes before the break, the writing was on the wall.

Chelsea took their foot off the gas during times in the second half but switched on and decided to go for the kill with 15 minutes remaining, as substitutes Didier Drogba and Ramires got in on the goalscoring act. 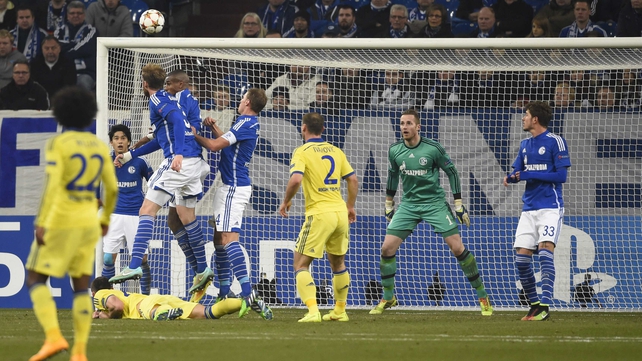 Manchester United assistant manager Ryan Giggs had said earlier this week that Mourinho's side are "head and shoulders" above everyone else in the Premier League, and it showed on the continent too.

Uncertainty remains over the immediate futures of Manchester City, Liverpool and Arsenal in Europe's elite club competition, but this win means the Blues are already assured of their place in the knockout rounds.

Chelsea stormed into a lead as Schalke goalkeeper Ralf Fahrmann did well to turn a Diego Costa effort behind for a corner in the opening minute, only to see Terry head home Cesc Fabregas' set-piece.

The hosts were hemmed inside their own half for much of the opening exchanges and, when they did finally mount something of an attack, Kevin-Prince Boateng was robbed by Willian and only a smart challenge from Felipe Santana denied Costa a clear run on Fahrmann's goal.

Schalke fared much better on their next foray forward and Eric Choupo-Moting was unlucky not to level as his shot hit Gary Cahill, looped over Thibaut Courtois and came back off the crossbar.

A lull in play allowed Chelsea's fans to burst back into 'One Di Matteo' chants and this time the Italian gave them a wave of appreciation as his side continued to grow into the contest.

But they were two down before the game was 30 minutes old as Willian exchanged passes with Eden Hazard before firing a low shot that Fahrmann failed to keep out, the ball squirming underneath him.

Schalke's fans soon turned on their side as they were caught dawdling on the ball and Costa intercepted an under-hit back pass but was unable to keep his balance as he tried to round Fahrmann and was eventually crowded out. 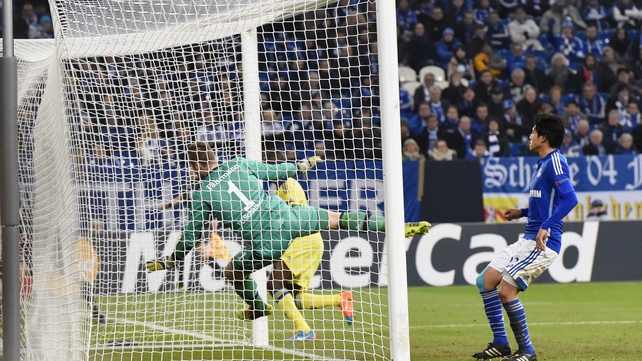 Chelsea continued their domination as Fabregas' cute ball over the defence allowed Oscar to volley at goal, with the busy Fahrmann able to push the ball behind.

But once again the respite was short-lived as Fabregas delivered another corner into the danger area and Kirchhoff mistimed his headed clearance under no pressure from a Chelsea shirt and it flashed into his own net to put the visitors well and truly in command.

The second half started in much the same vein as Costa robbed Santana of possession, only for the Brazilian defender to atone for his error by getting back to poke the ball away as the in-form Chelsea man looked to strike.

Di Matteo altered both his system and his personnel at the break and, although Schalke were able to keep better hold of the ball, it was Chelsea who were still carving out the better chances.

Branislav Ivanovic fired a well-struck volley wide having been found free inside the box by a clever Willian pass before Costa, still without a European goal for Chelsea, fluffed his lines when played in by Oscar.

That was the last piece of action for Costa as he was replaced by Drogba, the man who scored the decisive penalty in the final against Bayern Munich, shortly afterwards.

The experienced forward netted his first chance of the evening as both he and Willian beat the offside trap and the Brazilian unselfishly squared for Drogba to tap home.

Chelsea decided enough was enough at five and saw out the remainder of the contest to leave Mourinho no doubt happy with progression and, in all likelihood, inwardly delighted at putting one over on Di Matteo.