Wales maintained their unbeaten start in Euro 2016 qualifying as a defensive performance of true grit and resilience saw Group B favourites Belgium held in Brussels.

Nicolas Lombaerts struck a post for Belgium in the first half and Eden Hazard was a constant tormentor throughout, but Wales refused to yield and they held on for a point which will strengthen their growing conviction that they can qualify for the finals in France.

After being forced to soak up pressure for large periods, Chris Coleman's side did break out to create the odd chance.

Gareth Bale twice forced saves from Thibaut Courtois in the Belgian goal with swerving free-kicks, while the Real Madrid forward went close with a second-half shot after powering past two home defenders.

Both sides made three changes from their previous encounter - Aaron Ramsey and Joe Allen welcomed back into the Wales midfield after injuries and joined by David Cotterill - but it was Belgium who enjoyed the early possession.

Hazard clearly had a licence to drift when Belgium attacked but twice the hosts were let down by poor Nacer Chadli crosses.

Wales were looking to launch swift counter-attacks, with Bale operating in the centre-forward role, and he was only denied from one such opportunity by a last-ditch Jan Vertonghen tackle.

Bale had another sight of goal after 14 minutes when Lombaerts fouled Ramsey to concede a free-kick 25 yards out, Courtois just about pushing the ball to safety.

In what was proving an open affair, Belgium went straight on the attack and Hazard's mazy run took him into the Welsh penalty area where his low shot was held at the second attempt by Wayne Hennessey in the Wales goal.

Hennessey was far more convincing when Divock Origi's flick freed Chadli and the goalkeeper came off his line to save smartly.

Wales were starting to come under pressure and when they failed to clear a corner, Lombaerts swivelled in a crowded area to strike the far post with no Belgian able to provide a telling touch on the rebound.

Belgium were pinning the visitors deep inside their own half and Joe Ledley was booked after conceding a free-kick within shooting distance.

But Hazard planted his shot into the Welsh wall and Belgium could not capitalise from the resulting corner as Marouane Fellaini's flick-on escaped Chadli at the far post.

Bale was being completely isolated as Wales' early promise on the break had completely disappeared and the defence were having to dig in, but they made it through to half-time after Kevin De Bruyne's free-kick was comfortably held by Hennessey under his crossbar.

Wales sent on George Williams at half-time to give them more attacking potency and the exciting Fulham teenager started well by slipping Vetonghen down the touchline.

But Belgium were still probing and Hazard shimmied his way to the edge of the area, where he forced Hennessey into saving at the base of a post. 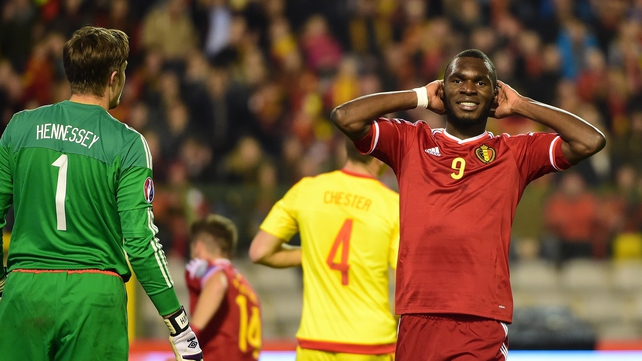 Wales were keeping the ball better at the start of the second period and Bale drove at the Belgian defence to fire a shot across Courtois but just beyond the far post.

Bale was now starting to see more of the ball and his industry won a free-kick which again forced Courtois to be alert.

Hazard's dribbling ability was still posing problems but Wales' growing belief was reflected by the fact that left-back Neil Taylor advanced to find space for a shooting opportunity, even if the end product did not trouble Courtois.

Belgium were also looking to profit from quick breaks, especially when Hazard was in possession, but De Bruyne dragged a shot badly wide with Wales short of numbers for once.

Allen, who had come off worse in a challenge with Fellaini to collect a bloody nose, then joined Ledley in Czech referee Pavel Kralovec's book by blocking off Hazard.

Belgium sent on Christian Benteke and Dries Mertens to find the key to unlocking the Wales defence but too often the Red Devils were guilty of sending in aimless crosses.

But Belgium really began cranking up in the pressure in the final 10 minutes and Benteke headed over before Chris Gunter stopped Hazard reaching a loose ball in the area as danger lurked.

Wales were not settling for a draw, however, and a delightful move ended with George Williams back-heeling the ball into Robson-Kanu's path and Courtois having to go to ground to make the save.

The tempo of the contest was interrupted when Mertens suffered a nasty-looking injury in a clash with George Williams and Wales held on during six minutes of stoppage time to claim what could prove to be an invaluable point in the final reckoning.